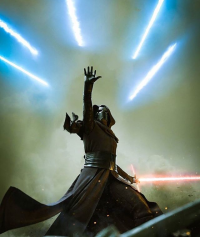 I was in the Navajo

I know, but even still, the idea that he's used gun-like objects has been floating around forever. He uses one in the Dark Knight Rises. It's probably a similar thing just to help subdue Doomsday, though it would be better if he found another way to be helpful.

You know that comic, the Dark Knight Returns, that the movie is loosely based on? That's why he's holding a gun. Just to clarify.

The trailer looks alright. It's underwhelming with the likes of Civil War and Star Wars both looking perfect, but at the same time, it's real flaw to me looks like it's going to be unfocused, and in a lot of places poorly written. Jesse Eisenberg was definitely not the best choice for Lex, but we already knew that from the last trailer so I wasn't surprised. But also, I hate Lex Luthor, with a passion. So hopefully this interpretation of him will cause so much backlash that I won't have to see him on screen for awhile. A long while. Doomsday looks... I mean, he looks like and is like Doomsday, a giant rock man who gets shoe horned into the end of most comics because he cannot carry a story on his own.

I mean, I don't really have anything else to say except I'm no longer looking forward to this movie. My only hope is that this whole situation is the opposite of what happened with the Amazing Spiderman 2. The trailers were all pretty okay to me, and the movie sucked. Maybe this movie will be amazing after all this meh? Probably not.

Spoiler
That was amazing and I can't wait for this movie. Did you see how he held on to that helicopter?! Holy crap, when I thought nothing could top The Winter Soldier, they release this! Black Panther looks amazing and it looks like they gave Falcon some actual fighting skills in this movie. Anyone notice the general lack of Hawkeye? (Not all that upset)

Last time I ask a Bothan to do anything for me. I asked a few Bothans to get me a coffee one time. All dead.

I think it's strange they picked bird men over Mon Calamari, or Bothans who appeared in the other Battlefront games.