19 replies to this topic

Sorry this took so long, but a couple of the judges fell through. In the end, there was only one other judge besides myself: Ter Loki. Big thanks to Ter for being an efficient & thorough judge! You'll find both our comments below, along with the final ratings.
I wasn't planning to divide the winners between Sarran and Achmer unless I got a lot of entries... and overall, I got fewer than usual this time... but there were a lot of great ideas in here, and a lot of tied ratings due to the limited number of judges, so I decided to split the difference and have a Winner and a Runner Up from each! Plus a bronze medal for the top entry from among the rest... just because.
Prizes (sketches and profile medals) are being prepared, and will be posted soon. ALL participants are also eligible for a Saber-Scorpion's Lair Shop discount code, though winners and runners-up will get a bigger discount. To claim this prize, just send me a Private Message here on the forums, or send an email to sales@saber-scorpion.com using the email address associated with your forum account. Thanks to everyone who participated!
EDIT: Sketch of the winners! 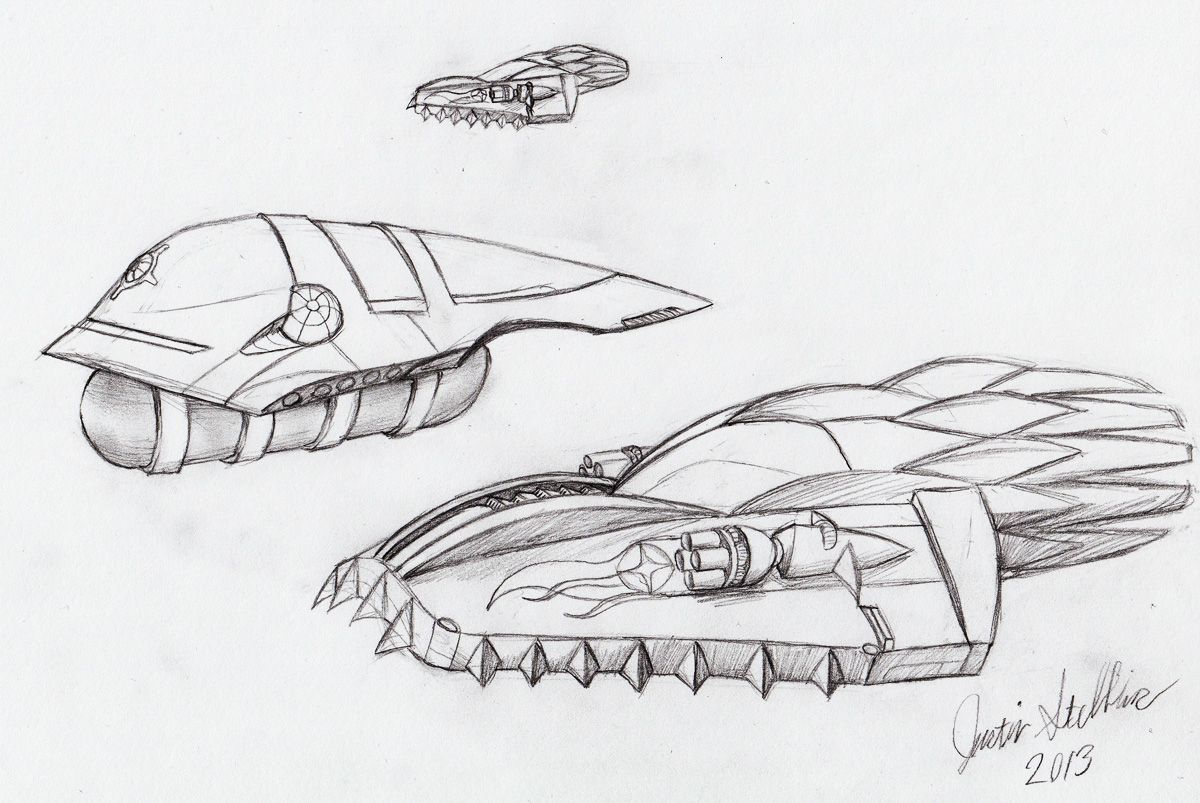 Ter: Wow, now this is a quite nice piece of work. The studless design is great, and I love all the little gold details and the serated edge to the wings.  The lifting-body type design may be common in sci-fi, but it's a nice break from tradition for a Sarran craft, and combined with the ship's bulk makes this thing look plain MEAN. Nothing at all seems out of place on this design, even the head you used for the pilot is perfect.
Scorp: At first glance this looks bulky for a Sarran ship, but its sleek, studless surfaces make up for that. A very solid build! I like the toothed edges - they make it look like an Aztec Tepoztopilli spearhead.

It's definitely got menace, and the Sarran need some ships like that. Wonderful job!
SCORE: 10/10
SARRAN RUNNER UP: "Cherub" Hoverbike and "Valkyrie" Aerowalker by kilosilvey 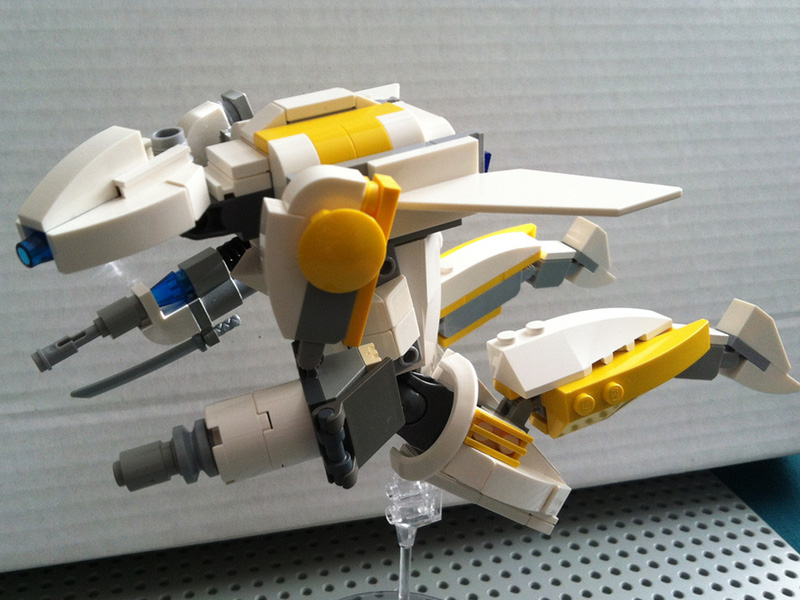 Ter: Two great designs here.  The Cherub is what I think a little minifig-scale model like it should be: Compact, sleek, and to the point. A very nice variation of the LEGO hoverbike with some Sarran-style flair.  You know I've always thought that Valkyrie would be a good reporting name for a Sarran aerowalker, or just a catch-all term for aerowalkers in general, and here someone's proving me right.  The Valkyrie itself is beautiful, a great combination of posabliity and sleekness, and still very Sarran. I'd always pictured aerowalkers transforming a bit more when in-flight, but I know how difficult that is with LEGO and the design still looks great.
Scorp: These are both wonderful - the hoverbike could even pass for a neat microfig ship. But the walker is the highlight. I asked for anime-style walkers, and I'm glad I got an entry that lived up to the request! Great design, good details and descriptions, and a very articulate build. Fantastic job!
SCORE: 9.5/10
ACHMER WINNER: Gastyrian Support Shuttle by Dagoth Ur 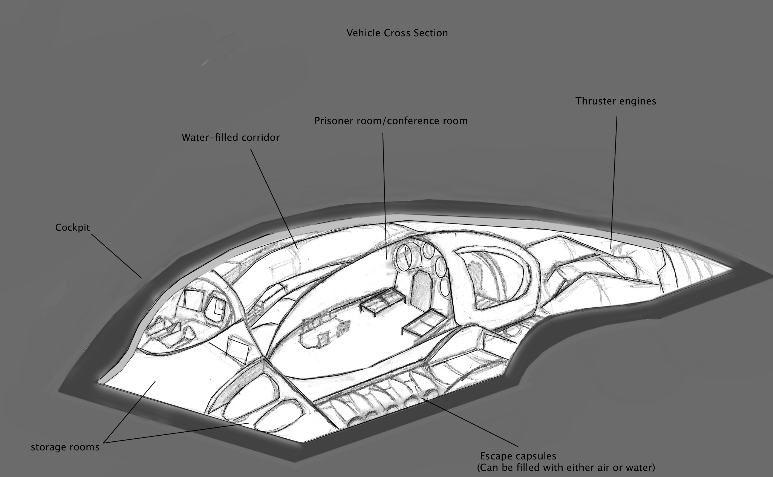 Ter: Now this little guy I really like.  The whole design is very Achmer, and the description really sells that point.  The shape, the layout, the exterior shots, it all really gels together on this one.  It strikes me as odd that the Achmer would gravitate toward a most likely more than 200 year old design, but that's just a minor nitpick. All in all a wonderful little ship, it actually strikes me as a sort of hybrid of the Runabout from Star Trek: Deep Space Nine and the Imperial Agent's ship in SW:ToR, and that works in its favor.
Scorp: I wholeheartedly agree with Ter; I really like this one. The sketches effectively convey the smooth look, and the "cross section" sketch is especially nice for showing the interior. The description ties it all together and provides a bit of humor on top, to boot. Great entry!
SCORE: 10/10
ACHMER RUNNERS UP (TIED): "Kraken" Tripod Walker by Tr0jin H0rse
and "Charybdis" Sea Walker by Crustacean Freak 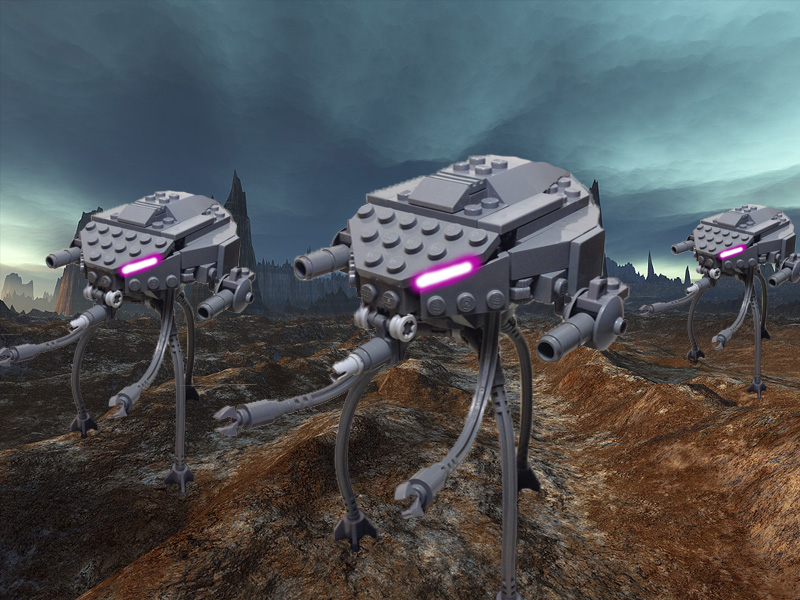 "KRAKEN":
Ter: I really like this one, it fits well with the Achmer design philosophy and the multirole capability of fighter and walker really seems to work here. I can easily envision a swarm of Krakens descending from a massive carrier, overwhelming enemy orbital defenses and then landing to take on ground troops like some strange hybrid of a Reaper Oculus and a Martian war machine. The only real complaint I have is the studiness of the front, but that's a minor nitpick and could hardly be helped at micro-scale.
Scorp: As Ter said, the only real complaint I can level at this is the studs, though I'm sure it would have been tricky to make it smoother at this scale in this color. Wait, is it sand blue or dark bley? I can't really tell... but that's good. Either way it looks right! Excellent job.
SCORE: 9/10 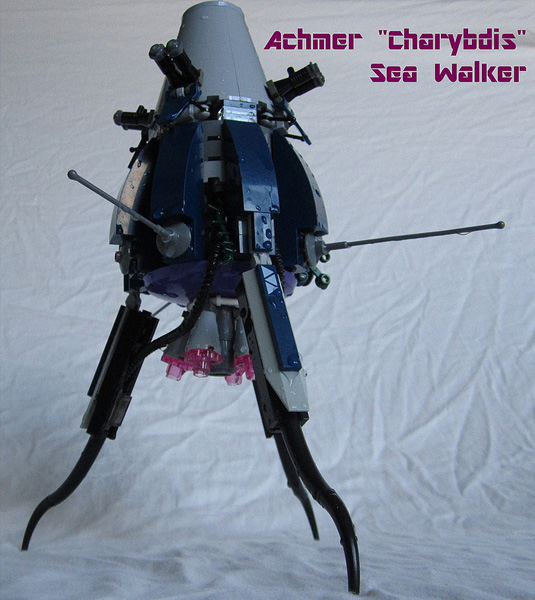 "CHARYBDIS":
Ter: It's a Martian war machine crossed with a giant squid, I love it! A wonderful design as always, Crusty. The whole thing just feels totally Achmer, and the tripod design works wonderfully for an amphibious craft like this. Honestly I just wish we knew more about it.
Scorp: I always greatly enjoy your entries in these contests, Crusty. Considering the Achmer theme, I half expected you to build something crustacean. And freaky.

Still, certainly a superb and very Achmer entry - nicely symmetrical and organic, and the water was a great finishing touch. That poor fish though...
SCORE: 9/10
OTHER RESULTS:
BRONZE MEDAL WINNER: Achmer "Riptide" Swimmer by Horatius - SCORE: 8.5/10 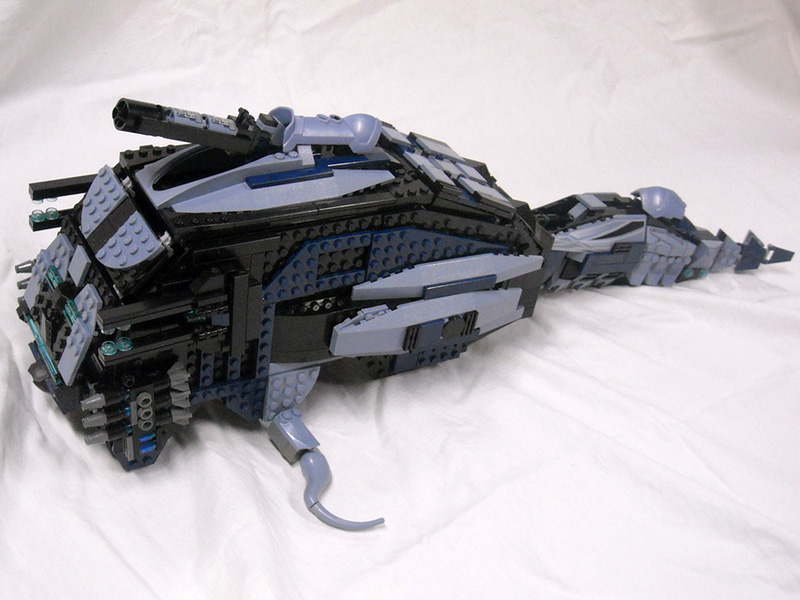 Congrats to the winners! In hindsight I wish I had drawn a few more sketches of the different angles.

Congrats to the winners (seriously some awesome designs), and thanks for the critique, Scorp and Ter. I'll definitely keep what ya'll said in mind. This contest helped me get some brain juices flowing as well as dusting off my Lego's and building some new stuff. I'm looking forward to the next contest!

Figures after the contest I come up with an idea for a better ship, ah well Congrats to the winners!

So, Rocky and Croc didn't win this time? Huh...

Oh, they didn't enter. My world is back to normal now.

What can I say? I sci-fi tech to death, it's why I always try to enter or volunteer to judge these things. It's all about the details for me, how everything meshes together and ticks. Of course that also means that I can ramble on a bit, (I could probably write a book on the design lineage of all the Enterprises in Star Trek if I wanted to) so I try to go into a lot of detail without writing a frickin' essay with my comments.

Of course it helped that we had a lot of awesome entries and some very cool ideas.

Nice job guys, too bad more people couldn't get entries in! Definitely looking forward to the next competition.

Ah, but does he find them fascinating?
McCoy: Does your logic find this fascinating, Mr. Spock?
Spock: No. "Fascinating" is a word I use for the unexpected. In this case, I should think "interesting" would suffice.

The lower case letters are majestic and elegant, I say!

Congrats on the wins Crusader and Dagoth! Great entries all around for that matter.

I'm glad that the judges responded so positively to my entry, many thanks Scorp and Ter.

Great entries everybody! Some really good designs were entered, and I enjoyed seeing what everybody could come up with.

I'm happy with tied second place, I didn't expect it at all. I just put up an entry to get everybody started, and it's great to see the judges liked it. Great job to the winners!

Get to tha CHOPPA!!!

You're DARN TOOTIN i love to roughhouse!!!

Shoot, I should have entered. The duel scene contest participants didn't get discount codes.

All Hail the Emperor and Senate of the Byzantine Empire

Congrats to the winners! It was well-deserved all around. A special shoutout to the Dragon's Tooth and Charybdis, two personal favorites of mine.

Bah! I knew I should have built mine smaller. Too studly, too boxy, and too large. Anyway, This was a great opportunity to explore Harmony. Thanks for the discount, Scorp!

Thanks! This is probably the best ship I've built in a while.

My overall favorite was the 'Cherub'. It was beautiful. Like Scorp said, it could pass as a microfig ship.

Congrats to the winners and thanks for putting on the contest Scorp! It was cool to try to build something out of my comfort zone. I'm not used to working with organic shapes, but it was a fun build.

Looking forward to the next contest, as always! I'd like to start building more Achmer in the future, methinks.

Congrats to the winners and thanks for putting on the contest Scorp! It was cool to try to build something out of my comfort zone. I'm not used to working with organic shapes, but it was a fun build.

Looking forward to the next contest, as always! I'd like to start building more Achmer in the future, methinks.

Yeah man, everyone put on a good show!

There, you can watch my slow, ongoing path to professional Art and Design.

Feedback would be much appreciated.

WELP, here are the other prizes I promised!

Profile medals for the winners:

Eh! Couldn't have done better myself! What is that attachment on the bottom; it looks interesting?

There, you can watch my slow, ongoing path to professional Art and Design.

Feedback would be much appreciated.

Also tagged with one or more of these keywords: Nova Refuge, LEGO