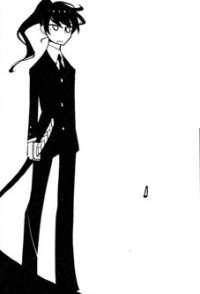 Song of the Whenever It always has to start with a letter. A bit melodramatic and far too flowery. But the request form to hell is written in such prose, an unfortunate fact that it seems most missed. While the banality of such an introduction could rival the works of Haken Wastia himself, it's a far cry from what you could possibly expect from this particular roleplay (and in all likelihood far less meandering). After all, Rise is anything but. The job is simple - at least, it seems so: terminate that tallywacker. Alliteration aside, people preying on poor poets is probably a pressing problem. With that in mind, a not so elite band of mercenaries has been gathered in the interest of clearing a dangerous debt - permanently. And while the common sense of a group of men and women (and gentlethings) should rightfully be questioned in regards to accepting the promise of money from a man(?) who can't pay a debt, it's an adventure that guarantees naught but zany characters, over-the-top stylings, giant mecha and a sometimes flippant (but always amusing) tone.

The preferred reading material of any editor who had the misfortune of reading Haken's latest. Imagine a world of deep prejudices, bloody wars, dangerously powerful cults and a threat of annihilation by unknowable dark gods that seems eternally upon the horizon. If you are, I'm relatively certain that boards dedicated to Warhammer Fantasy exist. While the tale involves far less boys garbed in green, there's a certain type of appreciable tone to Flight of the Seagull that you rarely seem to see in fantasy as of late. It's a voyage. A journey through a great sea to find a kind of treasure more curious than any other. As such, an open world means open character creation. There are benefits to leaving established fiction, and those benefits become clear during a sign-up. Sword and sorcery, high seas and high fantasy. Don't let the mostly irrelevant banner stop you, all you need to do is step aboard.

With kindness comes naïveté. Courage becomes foolhardiness. And dedication has no reward. If you can't accept any of that, you are not fit to be a magical girl. These words define the world of Puella Magi Madoka Magica, and as much as it seeks to disarm you as you look at the charming character designs and pastel-like, innocent aesthetic, it's a feint. Take what you know about the magical girl genre - the cutesy mascots, the pure hearted and the triumph of love and hope over all evils. Take it all and grind it into a fine, sugary powder because Madoka upends almost everything about those conventions and mainstays. It takes the concept of the magical girl and has it collide with Faust. The result is nothing short of brilliant. Madoka is, in a word, a deconstruction of its' genre. And a truly great one at that. Rife with symbolism, tropes turned  In all honesty, it's a bit hard to talk at length at just what the show is without spoiling too much of it, but it's a show that stands in open defiance of the standards set before it. I can't recommend it more.

As a self styled survival horror connoisseur, I look at the modern horror landscape and can't help but feel a bit let-down. I love the genre, and I've loved it for years, but despite gems such as Dead Space 2 or Amnesia glinting through that endless, empty dark, it's clear that the genre as I knew it may be destined to go the way of the point and click adventure. More and more branded survival horror games have chosen to put themselves closer in line with the more action oriented, to see if they can find the same measure of success that Resident Evil 4 had found. It's a genre that most certainly has needed to change, but most definitely not in the sense it's been going. I just wasn't aware that hope would come from a strange title that I picked up due in large part to word of mouth for a portable. A game with sixteen bit graphics, no less. Taken out of context, to view some screenshots or even watching some gameplay, it's hard to convince yourself that a game such as that could conceivably be anything close to frightening. After all, the SNES and the Genesis were many things, but a haven for terror they were not.

The general premise of Corpse Party isn't hard to understand, and it wastes little time setting the pins up before it knocks each and every one down. A group of students staying late get caught up in what's ostensibly an earthquake, but wake up in an entirely new building. Dilapidated, seemingly abandoned with walls smeared in the blood of its' past victims. Simply put, it's a game that you go into with a kind of acid feeling in your chest. You watch a group of friends succumb to paranoia, to insanity, to hunger and to desperation and watch every sordid second of it. Death is an oppressive force that hangs over the heads of each and every living person inside the ruins of Heavenly Host, and they're driven to the limits (and far past that of) normal people should ever be expected to experience. It's a compelling set up galvanized through a compelling mystery.

But I believe I began this talking about how a game not even using a tenth of what could conceivably be achieved with the PSP's hardware could possibly elicit any kind of fear reaction at all. I've thought about it, and here's what I offer: the sound design. Sound design is important to me. In survival horror more than anything. Atmosphere is two tenths visual and eight tenths sound. If you can effectively utilize sound, then you could make nearly anything come across as unsettling. Every good survival horror game that has ever been made knows the value in effective use of sound, and every poor one does not.

Sound is a much more dangerous tool than mere visual, because sound does what visual can never do: it can be, well, heard. Humans fear uncertainty. Evolution had long taught us to prefer what was knowable, because it generally meant a future. Sound is just so much more effective at evoking a feeling of uncertainty because the interpretation of sound is pretty much all mental. If you see the object of your terror skitter through a vent, it instantly becomes more certain than if you simply heard it. Your mind - your imagination - is the most effective tool that a creator has in eliciting fear. Corpse Party handles its' sound design with loving care. The ambient sound is unsettling, a dangerously subtle set of whispers, wind and creaking doors. The effect is has is impressive, to say the least. I'd grown wary of every corridor, always on edge and alert because the sound promised this unknowable, oppressive inevitability to it.

It's all helped along by a top notch localization effort. It's to be expected from the same team who had translated 999: Nine Hours, Nine Persons, Nine Doors and the writing is enormously effective in what it does. It's suitably gruesome, intense, effective and thoroughly gripping, and leaves just enough to the imagination for full effect. That last bit is something I feel that Corpse Party should be further commended for, because while it's easy to look at a game with such retro graphics and dismiss it, the very nature of the lack of detail, again, leaves much of the imagery entirely up to the designs of your own mind. And it provides a kind of pay-off that's otherwise impossible to achieve in a visual medium.