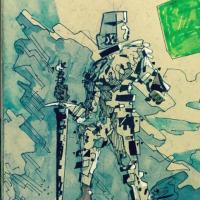 No problem. I'll post again soon! Thanks for pointing out the link; I've fixed it now.

All this stuff is really good! Your style improved a lot while you were away.

Thanks! Yeah, I've worked a lot on anatomy and composition a lot more.

Thanks man! I appreciate it.

Hey everybody! I've got some stuff to post. I hope you're okay during this time.

First I got a rendition of Tree-beard I drew back in 2017. It's funny how when I try to meticulously plan a character pose, it's always worse than the napkin-ske

This is a rather large image. Anyway, on the note of Tolkien, here's a sketch of the Fellowship of the Ring, sans half the group.

Here's some Ruin stuff. In this universe, the Zaphers are the nomadic remnants of a slave caste of long-dead empire. Today, they are often maligned as deceptive, greedy, and secretive, but unilaterally tolerated because of the millions of kilos of textiles, salt, and gunpowder they transport year-round.

A Theroma deputy of the Ural Mountain Range. The Theroma are known for their wine, bath-houses, and rich song and dance culture. Their skin changes tones from a deep blue-black in the winter time to a lighter blue in the summer.

Here's some fun stuff I got to do while I worked at the my university's IT department:

One event, we sort of partnered with Adobe. But I drew all the posters in Procreate. We wanted to make this a series of events, but the program I worked.

The T-shirt had this design:

I also did some posters:

Over the last 3 years, I also learned to 3d model and render. This was a concept done for a Raspberry Pi event:

This is another large image. I actually have an animator version somewhere! We used this for some signage advertising our web-design event.

Back to painting, here's a character design idea I had:

Here's an unused graphic I did. The Worms are a visual representation of the C:/-addresses in computers:

That's all for now! I hope everyone is okay. If you're lonely/bored, feel free to PM me and say "hi."