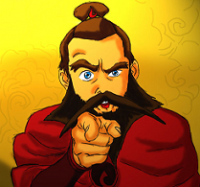 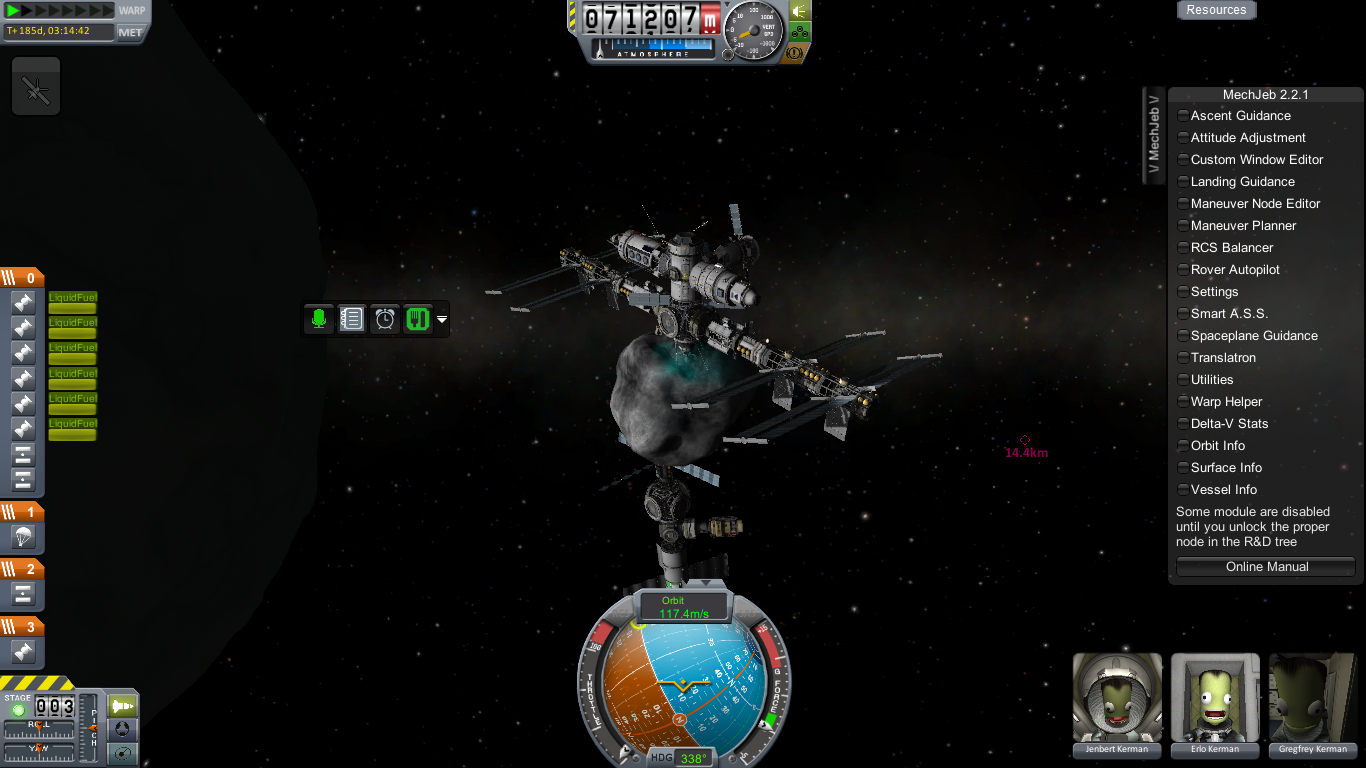 Yes, of course! It's pretty much the only watchable werewolf movie ever made, and it's also the solitary piece of work that essentially defined werewolves in popular culture today. I do, however, also watch every single bad werewolf movie (which is all of them, really

), just to know what kind of stories are being told about werewolves, due to both personal and academic interest. I study werewolves in legend and popular culture on a professional level now that I'm an academic, so I guess I'm officially a werewolf scholar now.

Now through a bizarre train of thought from this Q/A I want see a parody movie titled Rise of the Lichens. No questions or anything right now, I just had to let that pun be known.

Gratz to the winners! Probably should have saved mine for an NR contest, but I just had to get it out there and posted somewhere, and a contest about fire seemed as good a reason as any. Enjoy your prizes and shiny medals!

Correct! It's the quote that goes along The Weather Paradigm.

To be fair the big armies mostly stay in the background, in fact aside from a handful of companions that show up in cutscenes most of them just stay off to the side out of the way as well.  Plus, now you get the option to refuse/kill off certain companions if you wish.

Okay, EA, Bioware, whoever's idea this was, we need to talk. I really like SWtOR, I do, but making it so the only flashpoints I've run into that honestly NEED a group can't use group-finder is baffling to me.  You've got a nice feature to help people that don't like this "socialization" thing find groups so they don't get left out of missions that require multiple people, and you don't put it on the Star Fortress missions. All I want is to have a massive collection of each and every companion I can get my hands on (with one or two exceptions, if I see Skadge my lightsabers are going so far up his rear that he WILL taste the rainbow), but to do that I have to stand around on Odessan waiting for people to show interest in doing those missions. I mean, you're doing stuff I love, it's why I keep coming back, but you're killing me slowly as I stand around saying "LFG Nar Shadaa or Alderaan Star Fortress" repeatedly for what feels like hours on end.

On the other hand, I do rather like the Light v. Dark event so far. I've rolled up three characters that I'm rotating through: a Jedi Sentinel, a Sith Juggernaut (thought I'd try a more aggressive build), and a Scoundrel who is sadly not eligible for the event because I made him two days before the event proper began, whatever, I still have a green version of Mal now.  It's been neat to revisit the stories and classes after all this time and all of these changes, plus now I actually have a lot of shiny stuff I can give them right off the bat so I don't have to run around for ten hours looking for armor with a cape that my Sith can use. Capes are last trilogy anyway, robes + armor are the new hotness.  Of course now this mean that many of my original characters won't be going through Knights of the Fallen Empire anytime soon, but I can live with that.  And no, I will not be trying to get EVERY rank of rewards, just up to the new companion. This is mostly because, after playing all of the stories, I'd say I'd only play through four, maybe five again.

The Trooper's is just meh. Your squad goes rogue and you have to stop them, then you have to blow up a superweapon, then you run around doing black-ops stuff. The end. The companions are hit-and-miss too. Well, the only real miss is Tanno Vik, whom I REALLY wanted to throw out the airlock for all of the hoops he made me jump through just to recruit him, everyone else is fine. I like Dorne, and Yuun is fairly neat. Jorgan fills his role well enough without becoming obnoxious, and Forex is just a big cheesey pile of bombast and patriotism, it's like they turned a WWII propoganda film reel into a heavy battle droid, priceless!

The Sith Inquisitor seems a bit similar in hindsight, what with the story pretty much hitting three big notes with a whole lot of "eh" in between, and the companions all feel a bit underdeveloped (not that Xalek needs much development). Khem Val actually grew on me as time went on, despite my lack of remorse at using my "Punish" social ability to make him cry earlier. Ashara is just... Wow, I think the Anakin had a quicker fall to the dark side, and then since I was didn't want to be an ass and went light-side she basically just stayed the same. Other than that Talos is neat, while Andronikos is just kinda... There. Like Steve Blum's doing an "edgy" version of Spike.

Then the Jedi Consular is just... I don't even know. It's like the non-alcoholic beer of stories trying to pass itself off as *insert drink of choice here* that was Commander Shepard's story in the Mass Effect trilogy. The beats are pretty similar at times, but then it runs out of plot and starts ripping stuff from the Jedi Knight story to fill up the third chapter. As for companions, I really like Nadia a lot, she's just so optimistic and fun. Qyzen did eventually grow on me, but just... Don't kill any more Wookiees, okay? I thought that the storyline with Tharan and Holiday was actually pretty neat, though I can see why people wouldn't like him. And then Felix and Zenith are just kinda... There. Seriously, I forget Zenith is in the game half the time.

Bounty Hunter is solid, the story's not much to write home about at first, but it's neat how toward the end the plot is basically "there is a point where this all needs to stop and we have CLEARLY passed it" so you're just trying to fix everything and not get killed in the process. The companions are, with one notable exception, pretty good. Torian is okay, though I've never been much of a Mandalorian fan, they always seem like how the rest of the world must see the Trek fans that are REALLY into Klingons to me.  Mako is fun, her story was interesting but even if it wasn't she's still on the "good" list. Gault is also pretty fun, because every crew needs a con-man. Then there's Blizz, aka the best companion in the whole game (HK-55 is a close second), it is impossible to hate this little Jawa, he's my best bud. Another thing I liked was that should you not pursue a romance you can instead play matchmaker with Mako and Torian, kind of a neat addition.

I agree with the general sentiment that the Imperial Agent's story is the best in the game, which is kind of why I don't want to play it again. I've already been through it with my Sniper, and it really felt to me like she was the Agent, if I tried making another character it wouldn't feel right. The only downside I have with the Agent is honestly that the companions aren't better. Don't get me wrong, Vector is pretty interesting, Dr. Lokin feels spot-on, and Temple is pretty neat, but aside from the good doctor it just doesn't really click to me. Plus, I'm not a fan of Kaliyo and SCORPIO never sat right with me (fitting considering KotFE chapter 15 and 16).

Now if the Agent's story is the best written, the Smuggler's is the funniest.  The main plot isn't even that original at times, but they instantly motivate you right out the gate by stealing your ship, the dialogue is hilarious at times, and the companions are all good. Corso fills his role perfectly, Risha is great (which is why I decided to make my scoundrel, to try her romance), Bowdaar is a Wookiee (what else needs to be said?), Akavi works better for me than Torian because of her backstory, and Guss is just a fun concept in general that I won't spoil.

It's pretty clear going in that the Jedi Knight's story is meant to be the main one. I mean, you take on the friggin' EMPEROR in it. It's also clear that it's meant to be the story for the Republic side that KotFE works with most. It's still a neat story, and what I really like is how your decisions from as far back as Tython can actually change who shows up and what happens in the last chapter. The companions are good too. T7 is definitely in the top five for me, and I really like Kira. Doc is pretty good, but I wish that my Sentinel and Guardian had had more options than "romance" and "to hell with you" concerning him. Sergeant Rusk is kinda bland, and really odd with all those statistics, but servicable. The interactions I really like are with Lord Scourge, especially between him and the Imperial forces you run into later on.

Then there's my favorite, and my oldest character, the Sith Warrior. I really love this story, it basically puts you in the position of being Vader to Darth Baras' Palpatine.  You're running around killing Jedi and Republic troops as well as generally being a one-Sith wrecking crew telling people not to mess with your master, but at the same time you also get to see all the scheming and wheels turning in how the Sith coexist and run the Empire, and it can be fascinating. The companions are pretty darn good too. I've always loved Vette's snarky streak, and your turning of Jaesa to your cause is much better handled because of how long it takes to build and how utterly you break her master. Quinn is sort of like if Rusk was more subtle and actually showed the initiative to act on his own, while Pierce is pretty much the friggin' Terminator mixed with Sgt. Stacker from Halo. The only one I really don't like is Broonmark, but he's still better than Skadge. My first Sith Juggernaut, Darth Aurum, is for my personal head-canon purposes the actual story and events of the game. I cannot wait for Lord Scourge to be added as a KotFE companion if only to see how these two interact.

...And I did not mean to type nearly that much. Whoops.