Alright, that's our first conference of E3 2018 down. And it was awful. Seriously, that was eighty minutes of nothing. If you thought Nintendo's Metroid Prime 4 announcement of "Here's a logo, be excited" was low-effort, at this show EA just cut to a man in the crowd to tell us about a game he's making. Next year they're just going to have someone write the name of a game on a piece of paper, scrunch it up and throw it at the camera.

So, for those of you playing at home, Amy Hennig was making a Star Wars cinematic action game, and after years of waiting for it we saw like four seconds of it at E3 2016 (I think?). Since then, EA has taken it away from her, rebooted it to fit more GaaS rubbish in, and now it's back to nothing again. No sign of it at E3. The only Star Wars footage they had was of Battlefront 2. Jesus wept.

OK I'm going back to sleep, and maybe I'll dream of a better show than the one I just watched. See you all tomorrow for Microsoft's show, which will probably have more footage of EA's games than EA's did!

The battlefield V presentation was very short. Expect more at both Sony and Microsoft.

I do wonder if Battlefront 2 is planning a battle Royale since they announced that they are working on their biggest map ever and they are putting squads in battlefront 2. EA is trying hard to save Battlefront. The time they have left on the license is only a few years. 2023 to be exact when the star wars license gets opened up again.

Out of all of that Jedi:Fallen Order seems to be the most interesting to me. Seems like a possible single player game set along the same time frame as that game Amy was working on. The thing they cancelled.

The multiplayer reboot probably will show up at e3 2019.

EA motive game has not been revealed either. Kinda odd.

Out of all of that Jedi:Fallen Order seems to be the most interesting to me. Seems like a possible single player game set along the same time frame as that game Amy was working on. The thing they cancelled.

I wonder just how singleplayer Fallen Order is going to be, though, considering it's made by Respawn and published by EA. I'd love a full, meaty singleplayer game, but I feel like it'll just be another 5-6 hour campaign with the meat of the game being in multiplayer.

Phil Spencer is promising '15 World Premieres' at tonight's Microsoft show. Hopefully Cyberpunk 2077 is going to be one of them. Cyberpunk, baby! How long has it been since that CG trailer? Like eighty years? (If I had to guess some of the other ones, I'd say From's game Shadows Die Twice is a good bet, Forza Horizon 4, a Gear and a Halo. Maybe Assassin's Creed Odyssey and Splinter Cell as reveal trailers, with further footage at Ubisoft's show?)

“It’s my baby. I helped start Mass Effect from the beginning. Of course we intend to get back to it at some point.”

YEAH AND YOU HELPED KILL IT, TOO! GRRRR

EA's Origin Access Premier is basically Xbox Game Pass for the PC, but a little bit worse value. $15 a month or $99 a year, and you only get EA games, so it's more expensive and has a worse range than Game Pass. Pretty much as expected for EA, really. It's still a pretty good deal, though, to be honest. Imagine if you just want to play Anthem and Battlefield V; a year's subscription to Premier is still $20 cheaper than buying those two games separately, and you get access to every other EA game along with it. Nothing to sneeze at.

You need to be online to play Anthem. Not surprising at this point, since it's a Destiny and I think Destiny is also always-online. I don't know if you need PS+/Live Gold to play, though. I guess you probably do.

I honestly don't know what to think of a new jedi led game with possible multiplayer modes. Last good one of those was Jedi Academy back in 2003?....

Microsoft has many rumors. Including Fable 4, and Perfect Dark possibly coming back although they could come a bit later so maybe not in 2018.

Microsoft also is mentioning something about a JRPG as well.

Sega has met with Microsoft. Idk why or what they are bringing, but speculation of Vanquish 2 or something else entirely is likely.

Metro exodus is supposed to show up.

Warner Bros could bring their new hero game and Mortal Kombat 11 to either Sony or Microsoft.

A new bioshock or other 2k games title. A rumor even hints at Duke Nukem? Maybe not though.

The oddball growing publishers are gonna be in the mix somewhere as well with some games to show off.

Thq Nordic(Red Faction? They have been remastering Red Faction 1, 2, and 3. Rf 3 remastered coming in June/July),

Could be some awesome surprises.

A new bioshock or other 2k games title. A rumor even hints at Duke Nukem? Maybe not though.

Y'know, I honestly forgot Bioshock even existed. They made three of those games last generation, and I feel like nobody's ever mentioned them since

So, hey, we've got some leaked screenshots for Assassin's Creed Odyssey, which looks basically identical to Assassin's Creed Origins except in Greece (right down to the enemy-spotting hawk you have a psychic connection with!):

And Just Cause 4, which looks like someone turned the next-gen filter up on Just Cause 3: 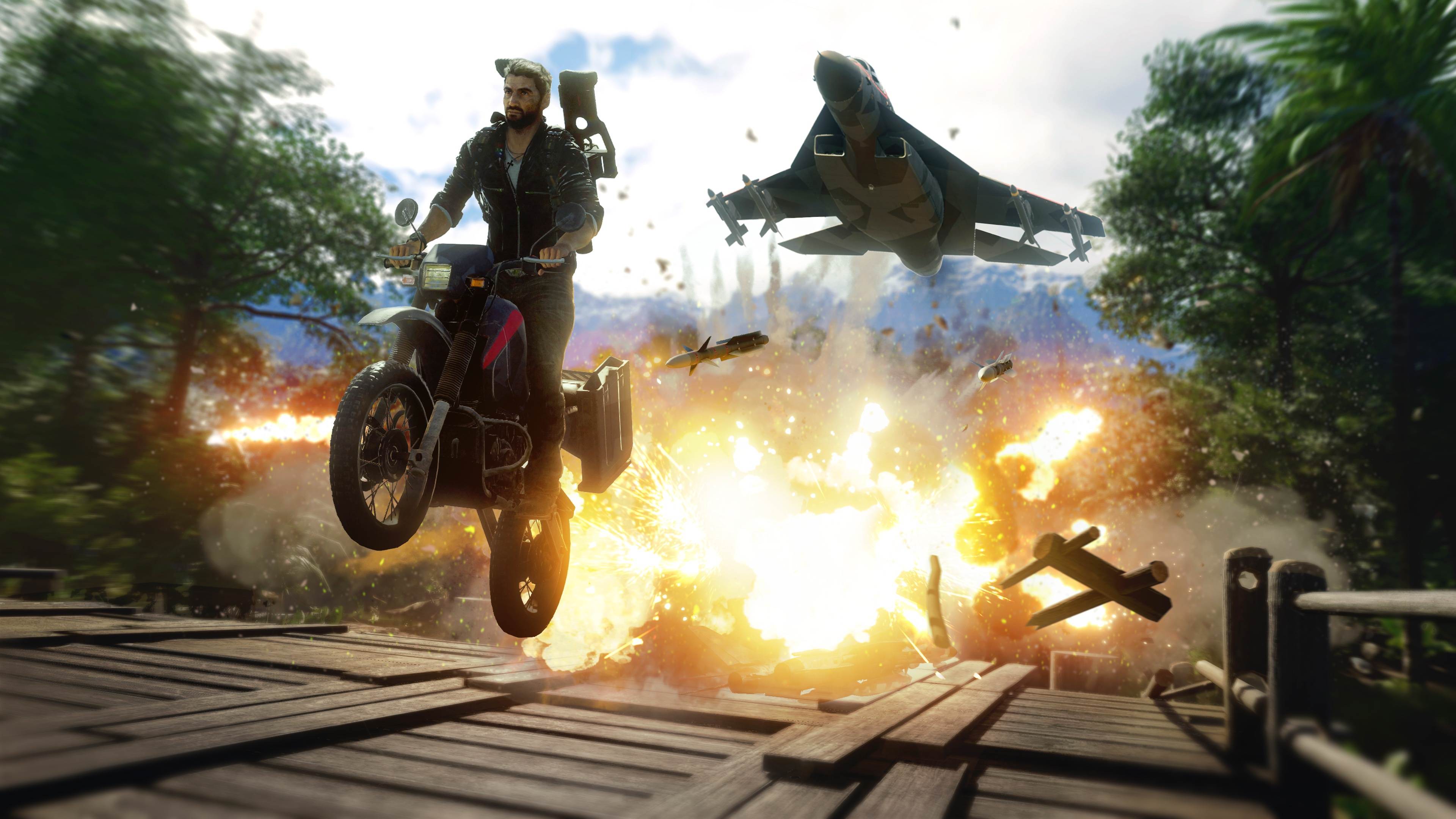 Anthem just makes me so sad every time I see it.

I love the single-player Bioware RPGs so much, the Mass Effect series is among my best ever gaming experiences (and I liked Andromeda, fight me).

This just looks like Destiny except a few rocket boosters thrown in, and they're freely admitting that the single player experience is second class.

There's no way you can make a story that really matters when the world has to sit in this perpetual status quo to accommodate for online. It's why, much as I love SWTOR, it felt laughable that throughout the Zakuul storyline nothing changed anywhere else in thr galaxy.

Ugh. I just feel that if people want to play a derivative, mediocre version of Destiny, then they can play Destiny. Give us an awesome rpg. Use the Star Wars license.

OR TELL ME WHAT HAPPENED TO THE QUARIAN ARK DAMNIT!

I really don't feel good about anything EA's doing with Bioware. I think Anthem looks alright, but I find it very hard to believe there'll be any kind of really compelling story in there. I imagine there'll be a whole lot of lore, but lore ain't story, and lore certainly ain't characters, and if we're not walking around a hub area trying to romance our favourite waifu/husbandos, are we really playing a Bioware game?

I feel like there are basically two ways this can go, and neither of them are what I want:

1. Anthem is a huge success, and Bioware is stuck making Anthems for the next decade until everyone is well and truly sick of them. Anthem, Anthem DLC, Anthem expansions, Anthem 2: We Promise It's Better This Time. All Anthem, all the time

2. Anthem is literally anything short of a huge success, and EA shutters Bioware and redistributes the talent to other developers so they can work on Battlefields and Star Wars games forever

Either way, I just find it very difficult to believe that this modern EA will ever let Bioware make another traditional singleplayer RPG with no form of shared online world GaaS stuff. I'm sure we'll see Mass Effect again as an awful smartphone game like that Command & Conquer thing from last night, but I don't see there ever being anything like ME1-3 ever again.

Anyway, I'm going to sleep now so I can wake up bright-eyed and... to be honest, feeling like warmed up garbage, for the Microsoft show! Here's the link:

Either way, I just find it very difficult to believe that this modern EA will ever let Bioware make another traditional singleplayer RPG with no form of shared online world GaaS stuff. I'm sure we'll see Mass Effect again as an awful smartphone game like that Command & Conquer thing from last night, but I don't see there ever being anything like ME1-3 ever again.


I worry that big budget single player rpgs are going the way of the Dodo (except maybe CD Projekt I suppose).

With this, and everything we're hearing about Fallout 76, that's two of the big producers of that kind of game conspicuously moving in the "online shared world that you will only be able to play until we shut the servers down" direction.

I can't think of a major AAA franchise (... excluding uncharted) that hasn't been driven into the ground

Microsoft and Bethesda today. Bethesda is later at 9:30 PM Est

Ten minutes until Microsoft! GET. HYPE.

It is four in the morning here, and if it seems like I'm mentioning that too often it's because it's FOUR IN THE MORNING HERE. This is definitely what they were talking about when they said a man must suffer for his art. I'm pretty sure.

btw if anyone wants a tiny little bit of E3 News, Nier Automata is coming to Xbox One on June 26th.

EDIT - We're starting with a well! It's The Last Guardian 2!

OK, I genuinely don't know what this is. A lot of shots of beautiful flora and fau-oh it's Halo. Yep, some Halo men just showed up.

EDIT: Stop subtitling your games "Infinite." Where do you even continue from there?

Powered by the Slipspace engine, whatever that means. Halo Infinite, with Master Chief with his helmet off, but then later with it on again.

Phil Spencer is here proudly accepting the blind applause of people who have just seen a Halo.

What the hell is Halo: Infinite?

EDIT - This just in: Phil Spencer is talking nonsense, but now he's bringing it back around to talking about the developers he's been meeting around the world. He mentioned Poland; that's where CDPR is!

EDIT: Ori is so beautiful.