Wulfgard Books
At long last, we are ready to announce the imminent release of the Wulfgard story collection ebook we promised from the Kickstarter!: 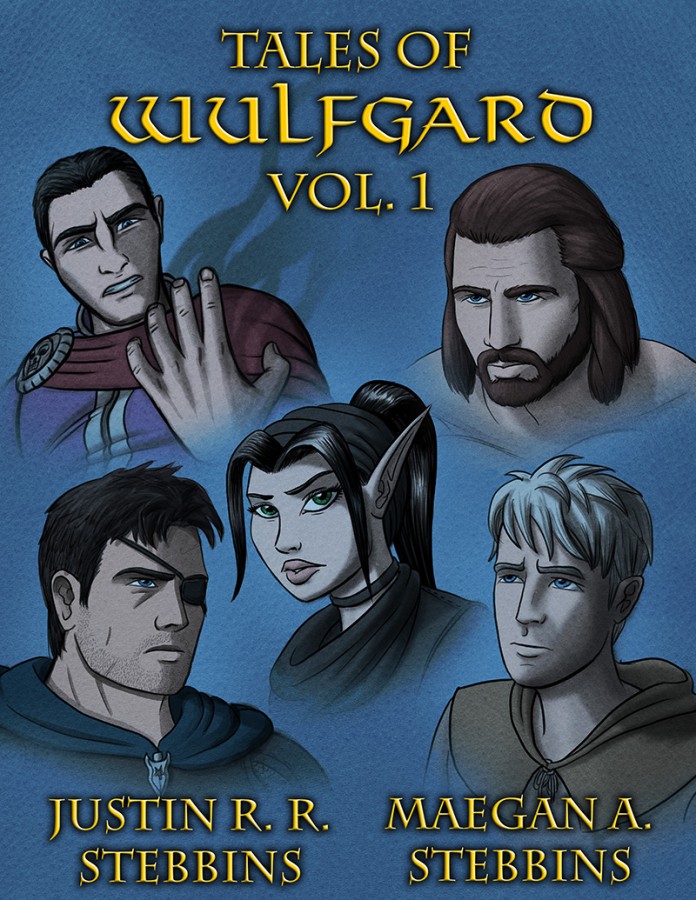 Now available for pre-order on Amazon, Tales of Wulfgard, Volume 1 is a collection of stories by brother and sister Justin R. R. Stebbins and Maegan A. Stebbins, set in the dark fantasy world of Wulfgard! There are 5 tales, each exploring the background of a particular important character of Wulfgard:

"Speak No Evil" - Whisper's Tale - by Justin
Whisper has never lived anywhere except the City - never even been beyond its walls. She knows it like the back of her hand, knows the long faces of its dark buildings like the faces of old friends - almost her only friends. But there is a new gang in town: a shadowy cult kidnapping young street urchins for an unknown purpose. And Whisper becomes one of their first victims.

"A Wolf Among Sheep" - Chris's Tale - by Maegan
On a lonely farm on the far northern frontier of the Achaean Empire, a young boy is born with stark white hair - a sure sign of witchcraft and sorcery. His loving parents protect him and keep him hidden from the sight of other people, who would surely see him killed for his dangerous abilities. But the fearful locals are not the only thing the family has to worry about: something lurks in the shadows of the forest near their home. Something with a taste for blood...

"Potential Energy" - Lord Plutarch's Tale - by Justin
The House of Plutarchus is one of the oldest and most powerful families in all of the Achaean Empire. But its youngest son, Septimus Plutarch, wishes to make his own way in the world. With great care, he begins planning a life of power and prestige, and more importantly, independence. But one day he makes a discovery about himself that brings all his plans crumbling down... and opens up a new, far more dangerous path to even greater power.

"Hunted" - Caiden's Tale - by Maegan
Since before recorded history, the ancient organization known as the Venatori have protected the people of Achaea from the threat of creatures far more powerful than any man: monsters. But even Caiden and Gwen - both highly trained hunters - find themselves outmatched when confronted with one of the deadliest beasts in the mortal realms: a werewolf. It will take all their experience and cunning to survive.

"Wake Not the Sleeping Bear" - Jörgen's Tale - by Justin
Jörgen Björnsson is a proud son of Northrim, despite being an orphan. He wants nothing more than to protect his home from conquest by the ever-expanding Achaean Empire. After fighting skirmishes against them for years as an outlaw, he finally joins a Northern army willing to take the fight to the Imperials directly. But Jörgen finds that real war is not quite as glorious as he had hoped, and he may never be able to go home the same man he was before.

Available only in eBook format (for now), Tales of Wulfgard, Vol. 1 will be sent to all Kickstarter backers for free once it is released, and everyone else can pre-order these exciting chapters in the Wulfgard saga!