86 replies to this topic

Hauling this topic back up by the scruff of the neck, but I need a build reviewed. The goal of this build is to be $500 at the absolute most. I have two different friends who want to dip their toes into the world of the master race but without breaking the bank and without it having to be Black Friday to make it cost that much (Cheaper is better). Ideally it would run Overwatch at High+ settings.

Overall it looks pretty good, but I would change the graphics card. Unless you're running a very low-power or small-form factor system there's not really any reason to get the 1050 ti, so I would suggest the RX 470 or RX 480 4GB models, which will give you a significant increase in performance over the 1050 ti with a fairly minimal price increase. 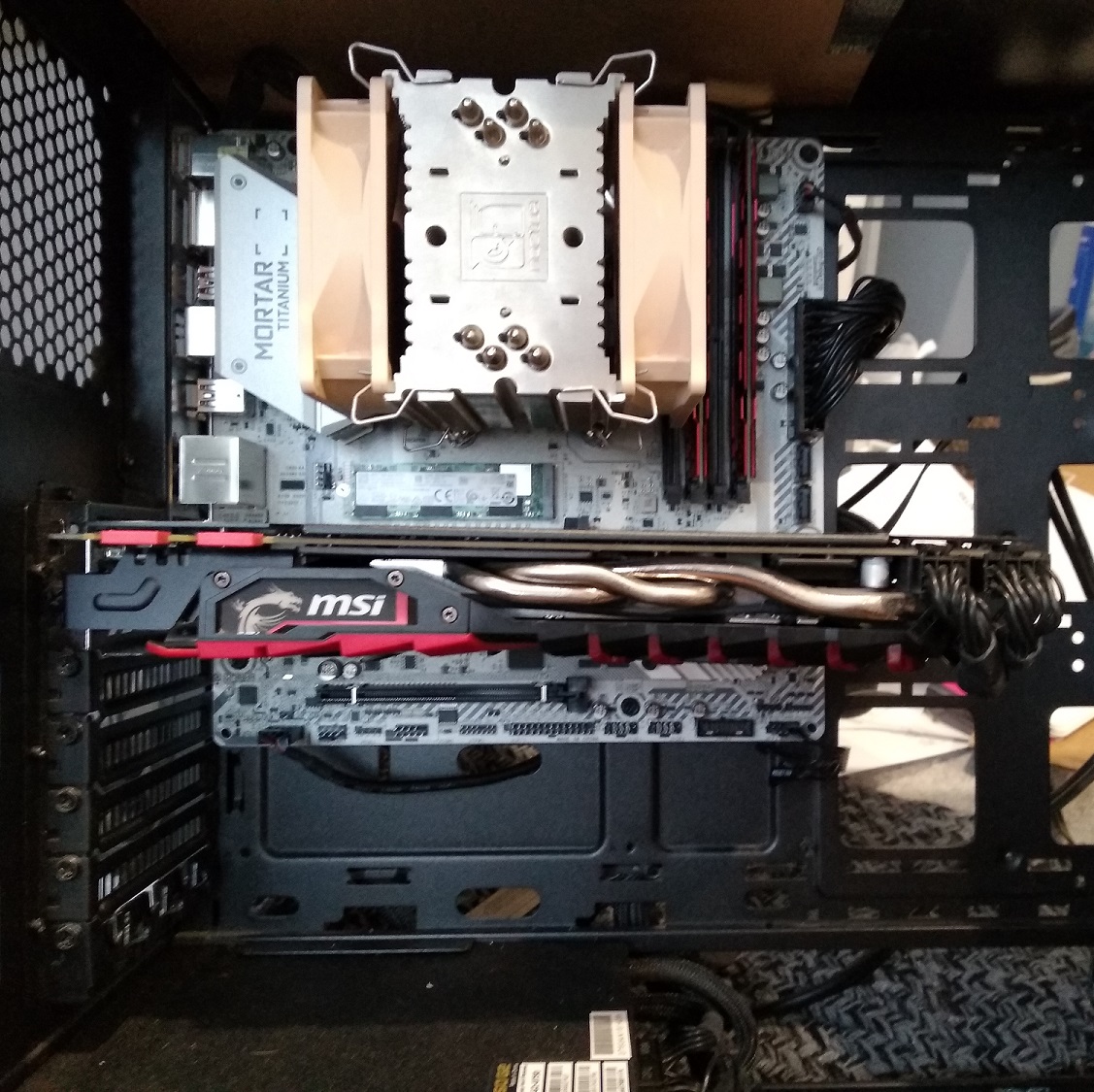 Hey guys, remember this thread? Remember building PCs? I haven't done it in over seven years, so I wondered if I still would, but it turns out it's like riding a bike. Well, a bike with a few new technological advances since the last time I rode one; I'd never installed an m.2 drive before, but that wasn't too difficult (apart from the tiny screw which was a nightmare).

Motherboard: MSI B450M Mortar Titanium (because how often do you see a silver motherboard?)

And the rest of the stats:

Case: Coolermaster... something with a window in it, gosh I don't know any more

HDDs: Just some old ones I've been using forever

I also replaced my CPU cooler for the first time since 2008, if you can believe it. I'd been using a Thermalright Ultra Extreme, and I would have kept it but I just couldn't find a new mounting kit to adapt it to the AM4 socket, so the old girl gets to enjoy her retirement and I get to see what this neat Noctua push/pull thing can do.

I did all this in anticipation of a little game coming out in April next year you might have heard of, and I took advantage of a glitch on eBay UK that allowed me to buy eBay gift cards at around 18% off, and then combine those gift cards with normal eBay 20% off promotions to get just disgusting deals on everything (I paid $200 Australian for the Ryzen CPU, which is like $140US). Honestly getting such good bargains was way more enjoyable than actually having a new PC

Those are some good specs! The 1070 in particular is a great card, I got a lot of mileage out of mine and really only upgraded so I could take advantage of a 2K monitor. Definitely a lot of life in those cards still.

I actually started working at a computer/electronics retailer about a month ago, and a big part of my job is helping people pick out parts for their builds, and you definitely scored some good deals there. A lot of our CPUs and GPUs come with game(s) bundles which really helps when it comes to selling the dang ol' things.

Here's my new build that I just finished about a week ago:

That's a pretty build! So clean!

That's a pretty build! So clean!


Thanks man! I'm quite happy with how it turned out, myself.