God forbid anybody teases a sequel these days.

Seagull bait? What do you refer to by that?

God forbid anybody teases a sequel these days.

After an extremely satisfying game I found it extremely un-satisfying.

Right or wrong, which side are you on, does it even matter if it's on the same coin?

I don't mind it, it really fits within the structure of the games narrative, where basically Hayden is trying to have a generic Video Game Narrative and Doom guy just keeps ignoring the 'mission control' to do whatever he wants.

Anywho, to anyone who has beat the game on Hurt me Plenty or below, I really really recommend bumping the game up to Ultra-Violence or Nightmare and giving it another go. The higher difficulties are really well crafted, where instead of simply turning all the baddies into bullet sponges, they become much deadlier and smarter but still go down quick if you know what you're doing, it makes for a tense experience where your entire arsenal is in constant rotation as the situation changes.

I'm really hoping this game lets mainstream AAA shooters know that you don't have to have regenerating health, a two-gun limit and bestiary composed of 4 kinds of human to sell well.

The only way that could've ended better though was if Hayden showed up with smaller sarcophagus, which has your pet bunny in it, and took it hostage.

People tend to forget the old Dooms sorta just ended like this one. There was no wrapping everything up. Just some 'see you next time' type stuff.

The Nicest Hoodie You Will Ever Know

Every time I read this thread, the more I want this game. It's gotten to the point where I started replaying the original Doom just to satisfy my need of destroying demons. Hopefully by Friday I'll get my copy. Probably won't play the multiplayer that much though. Just not the biggest fan of online matches unless I'm in a group of 3-4 friends.

I'm just waiting, waiting for someone to claim that Doomguy is a ripoff of Masterchief, complete with green suit of armor. Waiting. Patiently.

As much as I love Halo, the person that tries to state that claim is dead to me.

I've seen mutants from the hive of scum and villiany that is the youtube comments section claim as much, but never from a real human with a functioning brain. I just kinda wish Snapmap could handle some Serious Sam-tier monsterfests. Because nothing says a fun time like demons and you going: Just one more of the many things Id did right.

So now that id's done working their magic on the singleplayer portion of the game, they've now turned their sights towards making the Multiplayer and Snapmap better.

(Link has a GIF of the shotgun and it looks amazing, but here is a pic of the pistol) 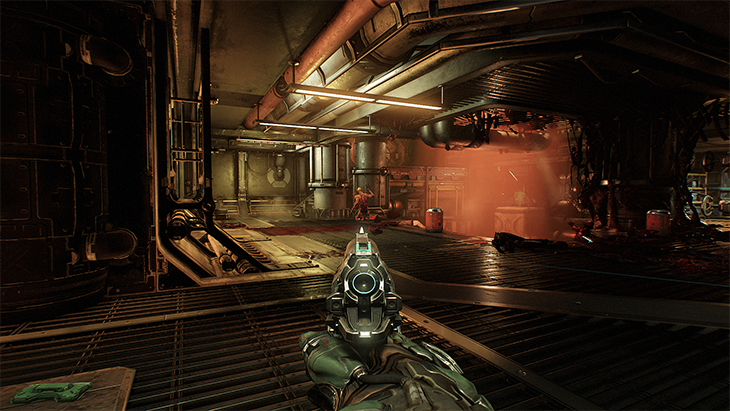 Okay, so here's the deal. I've been in California the last three days for a work training. It's been pretty good, but the training is over at 5pm, and I'm up in a hotel with nothing to do. So I get this idea, wouldn't now be an optimal time to buy a pre-used xbone and a pre-used Doom, and return it for full credit just a couple days later?
By day a suit and tie, talking about rates and guidelines.
By night, in my underwear, flattening hordes of demons.

Holy crap, Doom is amazing. It is absolutely everything that it was supposed to be. I got gewd, and brought the difficulty up to ultra-violence, and OHO BOY, what fun we had on my hotel bed.

I started on GoldenEye, did PerfectDark, lived the Halo experience, loved HL2, was blown away with Cod4, nazi zombies, (thoroughly underwhelmed with rock band), but TELL YA WHAT, I haven't had a better gaming experience in my life. This is the best shooter I've ever played. It was awesome. I absolutely loved it.
Load times after deaths in boss battles or runes got tedious, but it also was a moment's respite from the non-stop dispersion of hate projectiles. Weapon balance was exquisite. Challenges were challenging. Runes were diversifying. Power ups MADE THE GAME. Deciding the exact moment to grab that quad damage orb, that was the stuff of all the clutches. It was like trying to decide if it was a suitable time to BFG. And the berserk orb was fantastic too, especially when you throw on all your glory kill runes. It is RIP AND TEAR all day long.

Environments were tasteful and beautifully made, incorporating just enough platforming to make Doom a better Metroid Prime than Metroid Prime. The double jumps were definitely reminiscent of that, and it was better than it has ever been.

The secrets, the hidden areas, it was great. There were moments of quiet, when you run around looking for secret goodies, power ups and weapons alike. Weapon upgrades kept all but the plasma rifle relevant. But I take that back, I could have and should have used one of the plasma rifle abilities much more often.

Music was soooo good! I just want to run through the forests, tearing trees apart with my bare hands when I hear it. It'd be good practice. For the coming demonic invasion of course.

You guys know I'm really religious and such, and I am absolutely certain were I still young and stuffed at home, that my Mother would see the pentagrams all over the place and flip all of her biscuits. Doesn't matter. I'm blowing up hell mom, they're all afraid of me, if there one place that needs to be blown up, it's hell! So get out of my hotel room, I'm busy tearing this guy's tusk off his face and jamming it through his eye. Freaking pinky. All pinkies must die.

They pump up Doom guy's persona was awesome. The narrative about who this guy is comes in late, kind of in the stage where you're like "I'm feeling overwhelmed, my weapons aren't stronk enough, I don't know if I can do this" and then the Doom Testament is like "RIP AKD TEAR, NOTHING STANDS IN HIS WAY, HE'S KILLED EVERYTHING, RUN AS FAR AWAY FROM HIM AS YOU CAN."

Anyways, guys, if you haven't played it, PLAY IT. I'd play it again sometime. Dunno when, but I'd do campaign again on a harder difficulty. Because when you tear up the Gore nest, and they start pouring in, your fingers don't stop moving, your eyes don't blink, and the experience of flattening those armies is totally satisfying.

Worth not sleeping. Besides, I had yogurt and fruit this morning. Slow release sugars right there. All I've got to do today is return the xbone and game, get on a plane and go home. Which is also great. But if ever you're stuck in a hotel, and you don't want to spend your evenings thinking about guidelines I've got a perfect 10 in mind, and her name is DOOMGUY.

Free major Doom Update incoming for tomorrow.  Two new multiplayer modes: Exodus, a moving One flag CTF where both the flag and capture points are moving around the map, and Sector, which is basically control points game mode.

Snap map is also getting a major update with a weapon wheel, more weapons, Hell module parts, jump pads, as well as a playable Mancubus.

In addition, when the update launches, there will be a Double XP weekend for the multiplayer until the August 1st.  The reason being is that August 1st is when the first multiplayer DLC releases.

My friends, it is time. 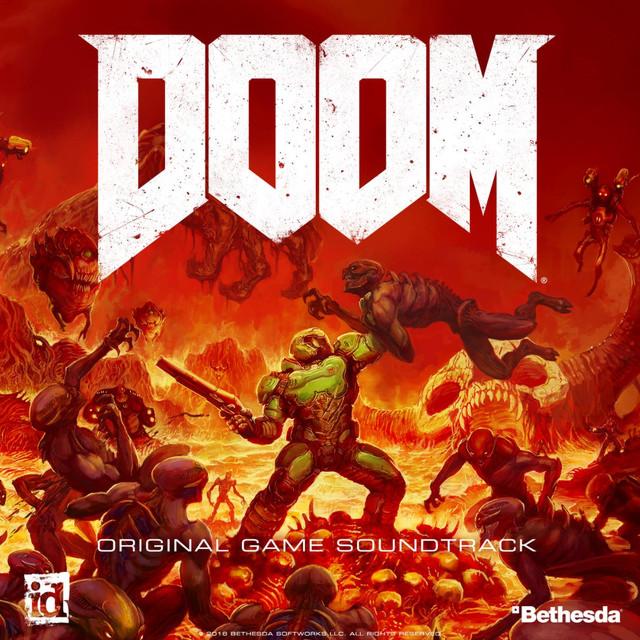 Perhaps the two big stand out points of this update:

Multiplayer Bots and Doom Marine armor for your multiplayer character.

Oh my goodness, that part where he's basically just flying around with double air-dashes and that grappling hook and then the Mick Gordon CHUGGACHUGGAs kick in is just insane.

Did you see the Hell Knight falling to bits as he blasted away at him? Real-time battle damage? BRO

I'm not in love with the way they're calling him 'The Slayer', like he's Buffy, when we all know his name is Doomguy, but I'll live.

(This is the best glory kill yet, btw)