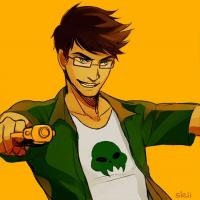 I used to be Silver Storm

I am Hank. I am an artist of a few different forms, including trumpet (mainly classical music, but also some jazz), photography, creative writing, and occasionally acting, though I have not done much of that. This year (my sophomore year in high school), I have grown fond of and gotten interested in math (I'm currently in pre-calculus) and physics. However, I would not go so far as to say I am really very good at either of them. I also enjoy learning about religions and philosophy, though my Catholic education has turned me off of the being religious track. I would consider myself either an atheist or a deist, though usually more so the former (though apatheism is interesting too).

I'm from (just outside of) DC

Languages: English, a tiny amount of Spanish and Latin

More I can't remember at this point

This is probably far more than anyone really needs to know, but I was bored, so I decided to spend some time flushing out my 'About Me' page.

Thanks for dropping by

Dude, that is awesome! I love the poster, and I can't wait to see the new character designs. Also, I really like the light, vibrant colors on that super dark purple background. It looks really cool. On a side note, I'll make sure to check out those comics.

I absolutely love light! Like Lord Capulet said, the shield is one of the best parts. I especially liked the circular shield. Ice looked really good too!

To be honest, energy is one of my absolute favorites so far. It's my top choice. They all look great!

Everything looks awesome! Good job, Neyo. Someone should start a RP in the Beyonders universe.

Here is a short story I've been writing. I've also been thinking about giving away some copies to some friends for Christmas. I may or may not add more to it. Ideas, changes, comments, all that stuff is welcome. Thanks!

Also: Geramnox means Shadow-wielder. And this is only the first draft.

He passed under the street lamp, almost disappearing completely as the light stuck him. Two minions walked next to him, yet only their shadows showed. As they continued on their way, the shadows around the man in the middle seemed to swirl around, forming themselves into different shapes. One formed itself into a spear and skewered a rat that had dared to cross the tall man's path.

The man turns the corner, and walks into an open door. He disappears completely in the shadowy corridor. I rise from my hiding spot, and walk towards the door.

The shadow man's minions are still there, guarding the entrance. One steps forward.

"What da you want?" He sneers at me. I respond with a right hook to his chin. He falls to the ground, unconscious.

His partner runs towards me, his sword drawn. I duck his first swing, and parry the next with my own sword, Venator. I slip my shield onto my arm, and block another of his swings. I knock his blade away with my shield, and swing Venator's pommel around, and slap it into the man's forehead. His eyes roll back into his head, and he collapses to the ground. I walk through the door.

I sneak along the hallway, my feet only whispering on the carpet, which is covered in dust. I slide my scarf over my nose, carful not to disturb any more dust than necessary. I don't want to sneeze and give myself away. I walk forward, my ears focused for anything.

"Argh!" A scream pierces the darkness. I hurry forward, my hand on Venator's hilt. I look ahead, into the next room. There is a massive stake, going through the floor and ceiling. A pile of kindling lies around it. And on the stake itself...

"Lord Marcath!" I half shout, half whisper. My master, my friend. And my father. I rush into the room, abandoning any sense of caution. I draw my knife from its scabbard, and set to work on the ropes that hold him captive.

I fall to the floor in a heap as my body is smashed across the far wall. Out from the shadows walked a half-translucent man, with a cold grin across his face. He gestures with his hands, and the shadows at his feet become rigid, and sharp as spears. Two of them head towards me, while the rest surround the man, creating a protective shield around him. I draw Venator, and slide my shield onto my arm. I block the first shadow attack, but it strikes with so much force that I feel a numbness race up the length of my arm. I charge forward, sword extended. I block two more shadow strikes with my shield, and lop off the sharpened tip of one of the man's shadow spears. He throws three shadow spears at me, and I roll to dodge them. Then one big, blunt shadow clubs me to the side. The man walks over to where I lay on the marble floor.

"You should not have trifled with Geramnox." He rasped. "It shall cost you much more than you should have bargained for. By this, I mean your life!" He formed a massive spear from the shadows, and raised it high. Then he collapsed, and the shadows started to fade.

"There you go, son", my father says. He is holding a piece of the kindling that surrounded the stake where he was tied. he must have finished what I started, and untied himself. He is thin, but still in good shape. "Follow me!" he yells.

We dash out the door, and run down the hallway. I pass my father a cloth from my bag. "Cover your face," I tell him. He does so, and we sprint through the dust, out to the dimly lit street. Where even more henchmen are waiting. I draw Venator, and pull my father's sword from my bag.

"Dominus," said my father, looking down at his blade, "It is good to have you back."

The first of the henchmen charged. I lunged forward with Venator, and stabbed the man in the stomach. He fell backwards, a look of shock on his face. The rest of the henchmen charged. I blocked a sword with my shield, and parried another. I kicked the man in front of me, and then slugged another in the face. My father was doing just as good as he used to, even without a shield. He parried a sword, and kneed his assailant in the crotch. He whipped his sword around, and lopped the man's head from his shoulders. My father turn, and slapped a spear from its path. He charged forward, and stabbed the man in the thigh, and then the gut. Then he pushed the henchman to the ground.

We wade through the group of henchmen, our swords swinging from side to side. I whistled, and soon the sound of hooves on the stone street approached. I leapt up onto my horse, and pulled my father up behind me.

"Onward, Ignus! Onward!" My horse turns, and dashes into the dark.

That. Is. Beautiful! Harry can stay in Michigan! We have Amarok!

Also, the middle one is my favorite. That is an awesome cloaking device.

He had me at first. When I saw the second and last one though, I knew it was fake. the second would have won, obviously.

Wow Dagoth, I absolutely love the room one. It looks so cool. And you did that where? In the car? You possess magic powers.

Nya is a samurai. The best ninja is Zane.

I thought you liked yellow ones better.

Also. Blackwings? Do they count?

Or anything we need to correct?


#392379 What should Scorp make next? LEGO Suggestions Topic

Doctor who. That would be really cool. It's a tv show FYI.

Seriously good movie. And a great scene! Though the one guy's not short...

He's right. It is inconceivable that you haven't seen it.