12 replies to this topic

Hey, when was the last time I did one of these? It's a ENLIGHTEN set review!

LEGO has been saving me a lot of money lately, you see... by NOT MAKING ANY CASTLE SETS! I'm sorry, but I don't count Nexo Knights - they're sci-fi, with accessories better suited to Warhammer 40,000 than Castle. The closest thing LEGO has to a fantasy Castle line these days is actually Elves, which is why I've bought a LOT of Elves sets. But they use the mini-dolls instead of minifigs, so...

So that's why I'm reviewing a Chinese LEGO knockoff brand called Enlighten! I wanted to test them out, because they have some neat minifig accessories, so I ordered the Enlighten Castle War of Glory Dwarven Chariot 3 Figures 243pcs Educational Bricks Toy Boy Gift - Without Original Box (which the actual instruction booklet calls "The War of Glory: Dwarf Secret Weapon") 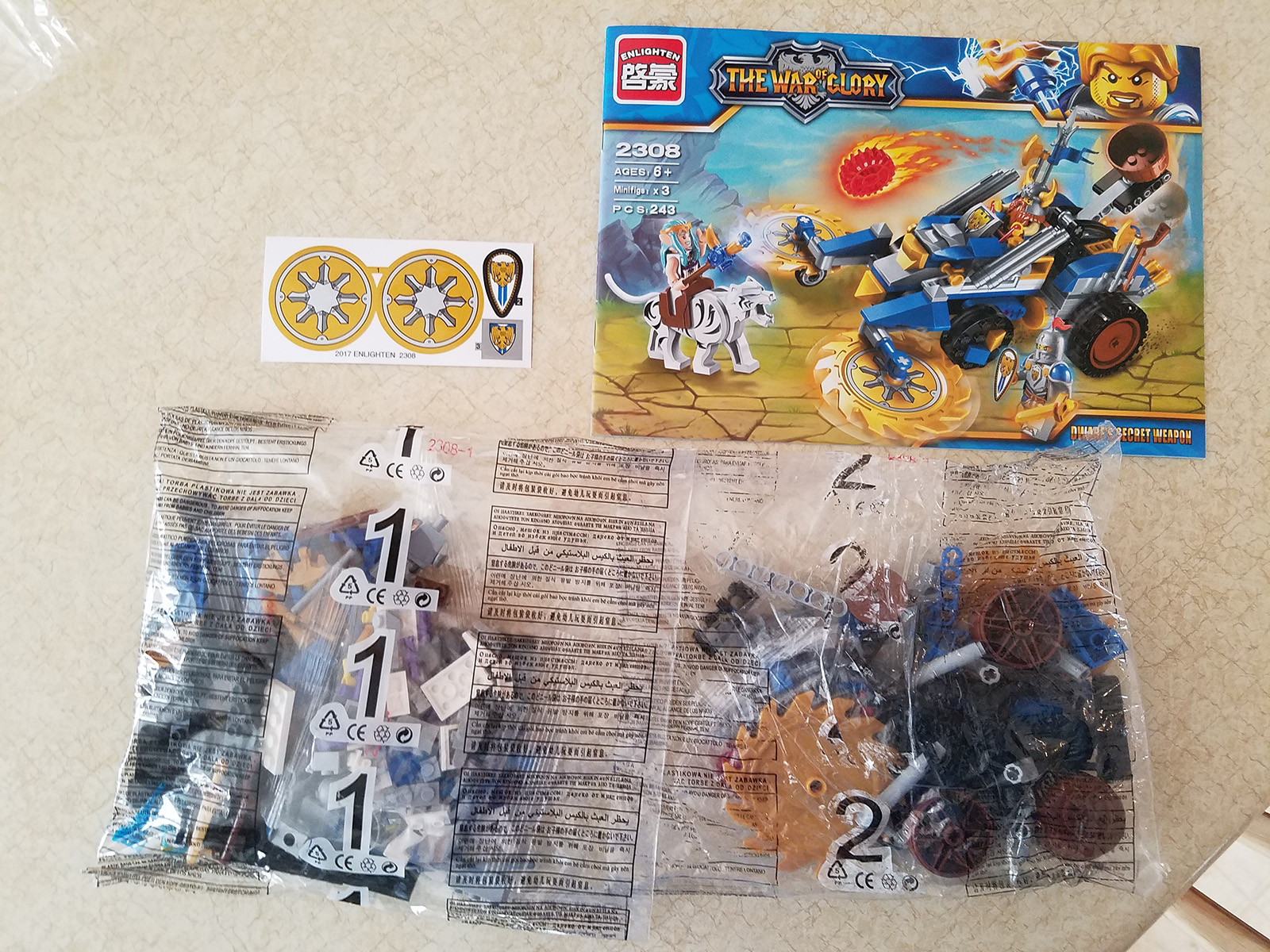 Instructions and bags. Even the bags are LEGO ripoffs!

These "The War of Glory" sets are very clearly inspired by World of Warcraft, by the way. Some other sets include airships and gryphon-riders. 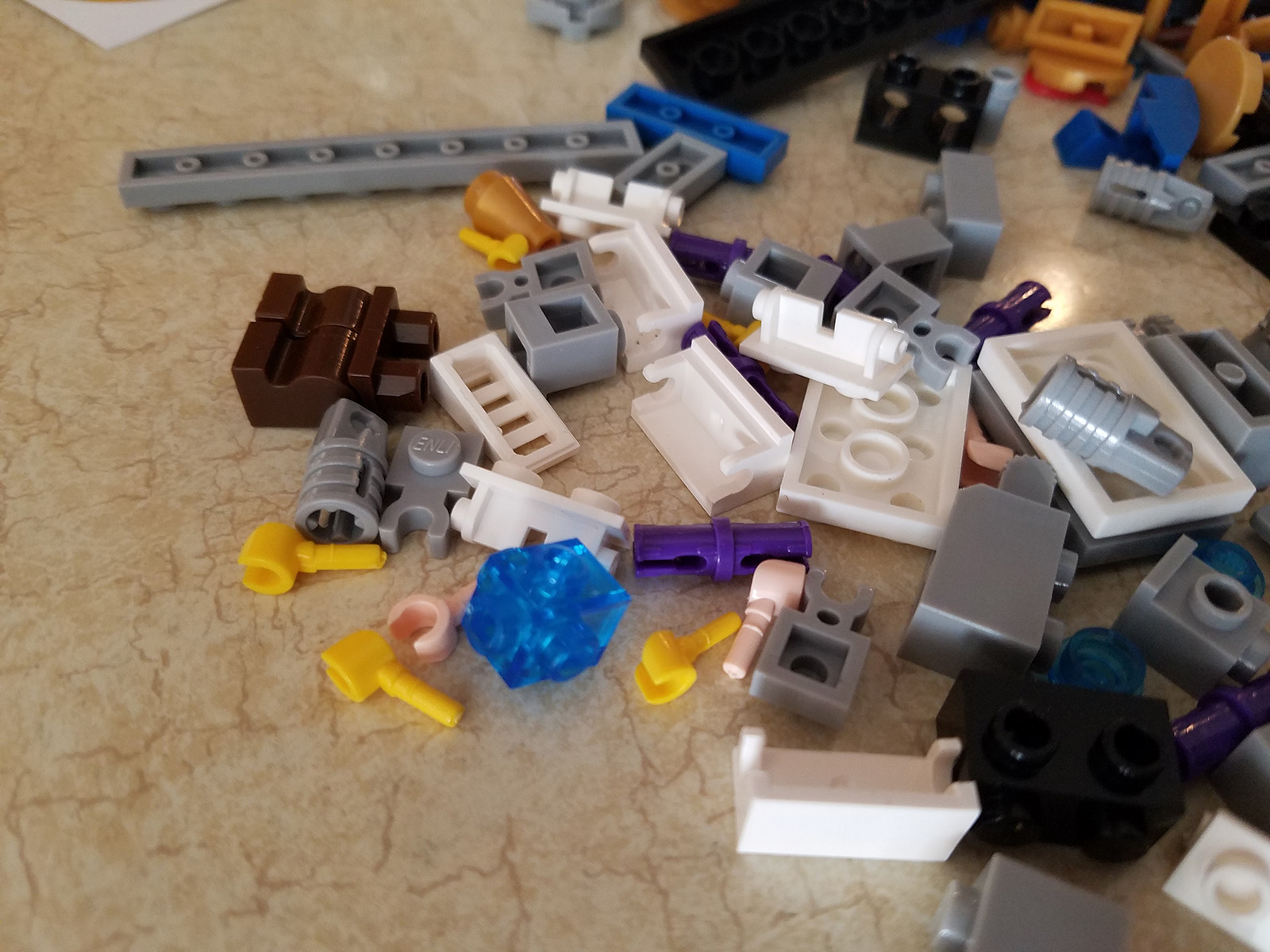 A closeup of some of the parts spilled out. All of the minifig hands are loose to start, and each 'fig comes with an extra hand, probably because the things are kinda flimsy. Note the odd-shaped Technic-style pins and the JOINTED DWARF LEGS (another pic of them later)! 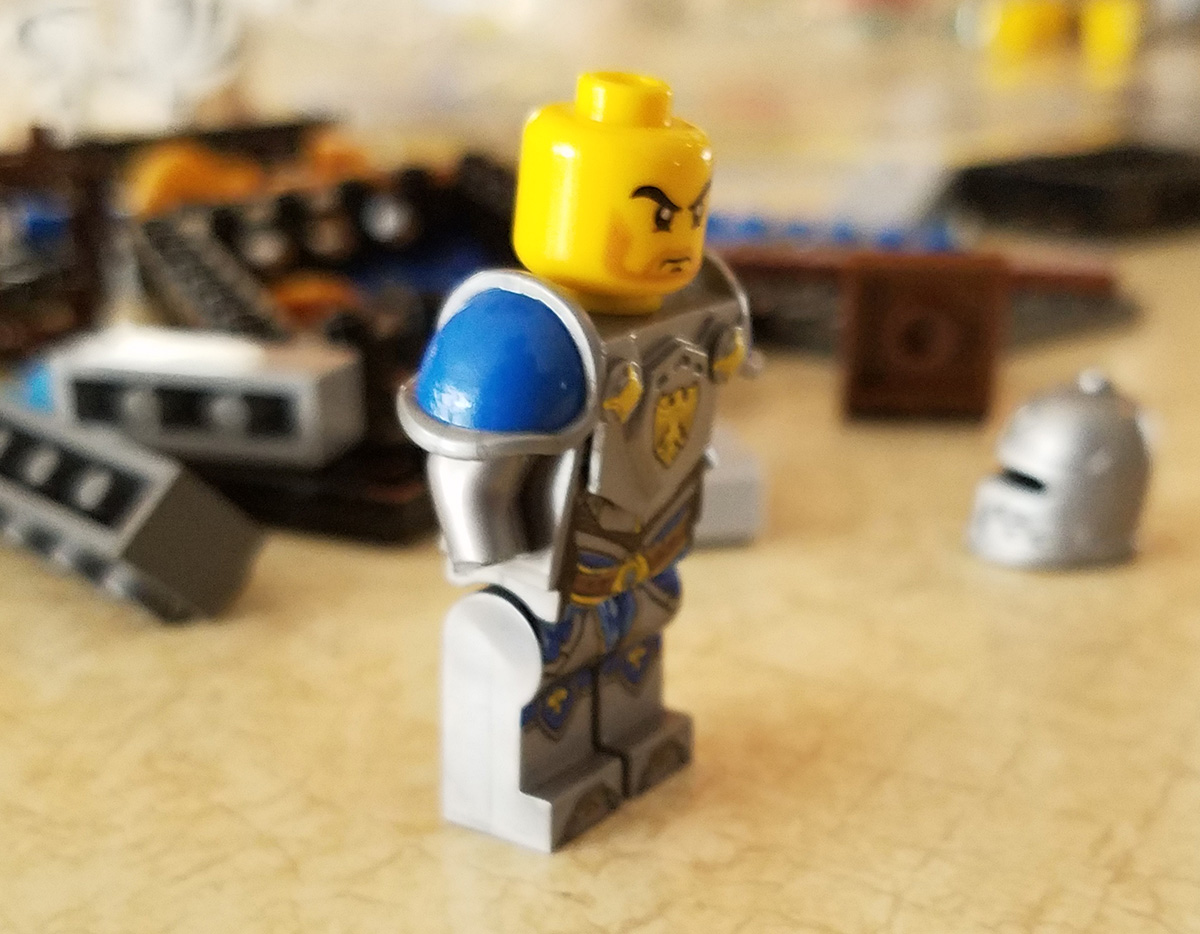 The minifigures aren't quite up to LEGO standards, as expected. Note the huge gap between the legs and hips, and the nicked wrists on the arms (they're almost all like that, strangely). The arms and legs come apart pretty easily too. I would never consider one of these a substitute for a real LEGO fig (I only use real LEGO 'figs in my shop). But the shoulders look pretty nice! 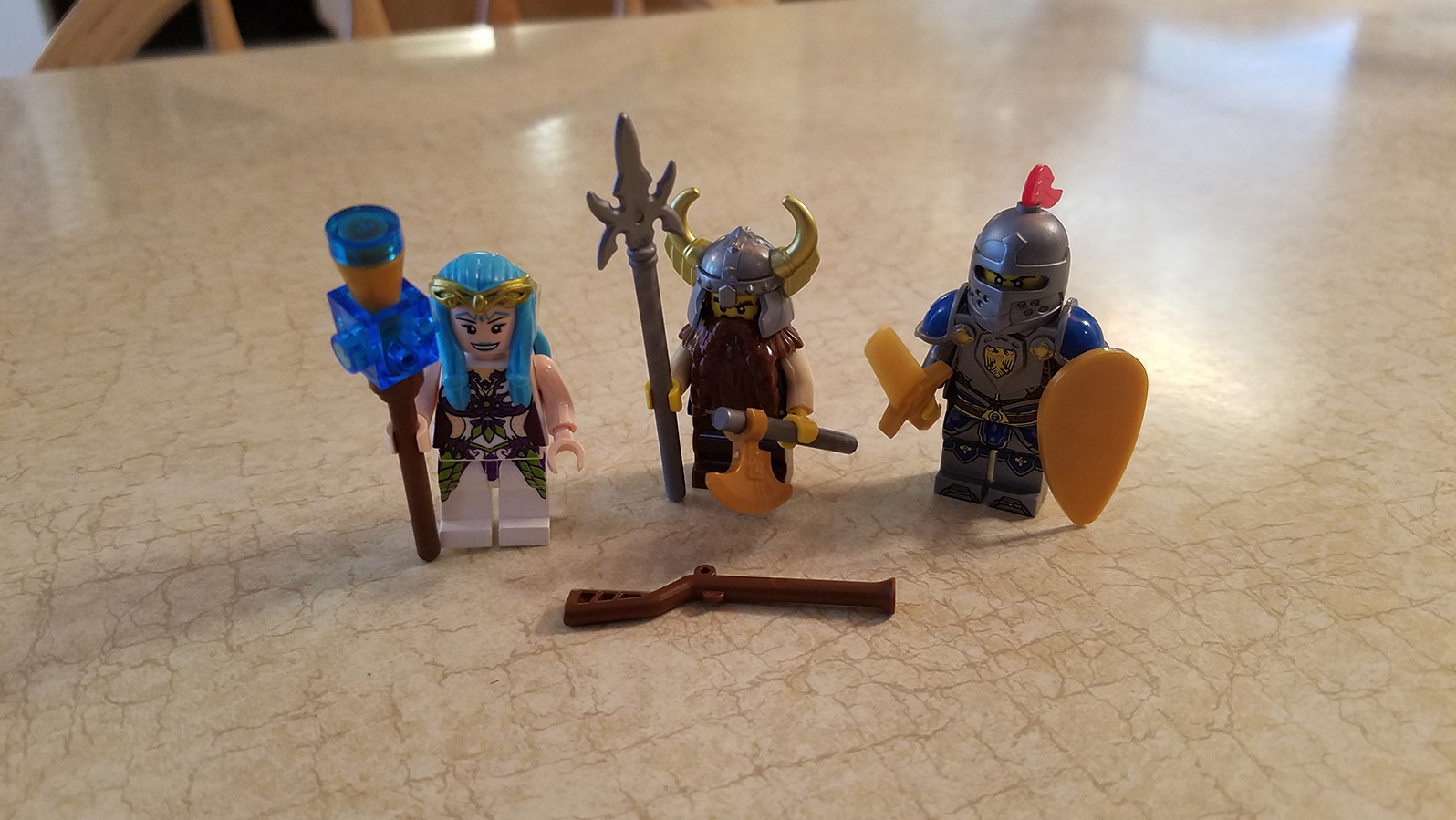 Another look at the 'figs. Interesting that the elf is flesh-tone but the human and dwarf are yellow. The elf clearly has some inspiration from the LEGO Elves line (one of the other sets has a pretty direct copy of a LEGO Elves boat), with a LotR style tiara. Also interesting that the set features a copy of a LEGO spear except smaller and with sharper edges on the spear-head. The horn/wings on the dwarf helmet do NOT detach, by the way. Pretty cool helmet otherwise. 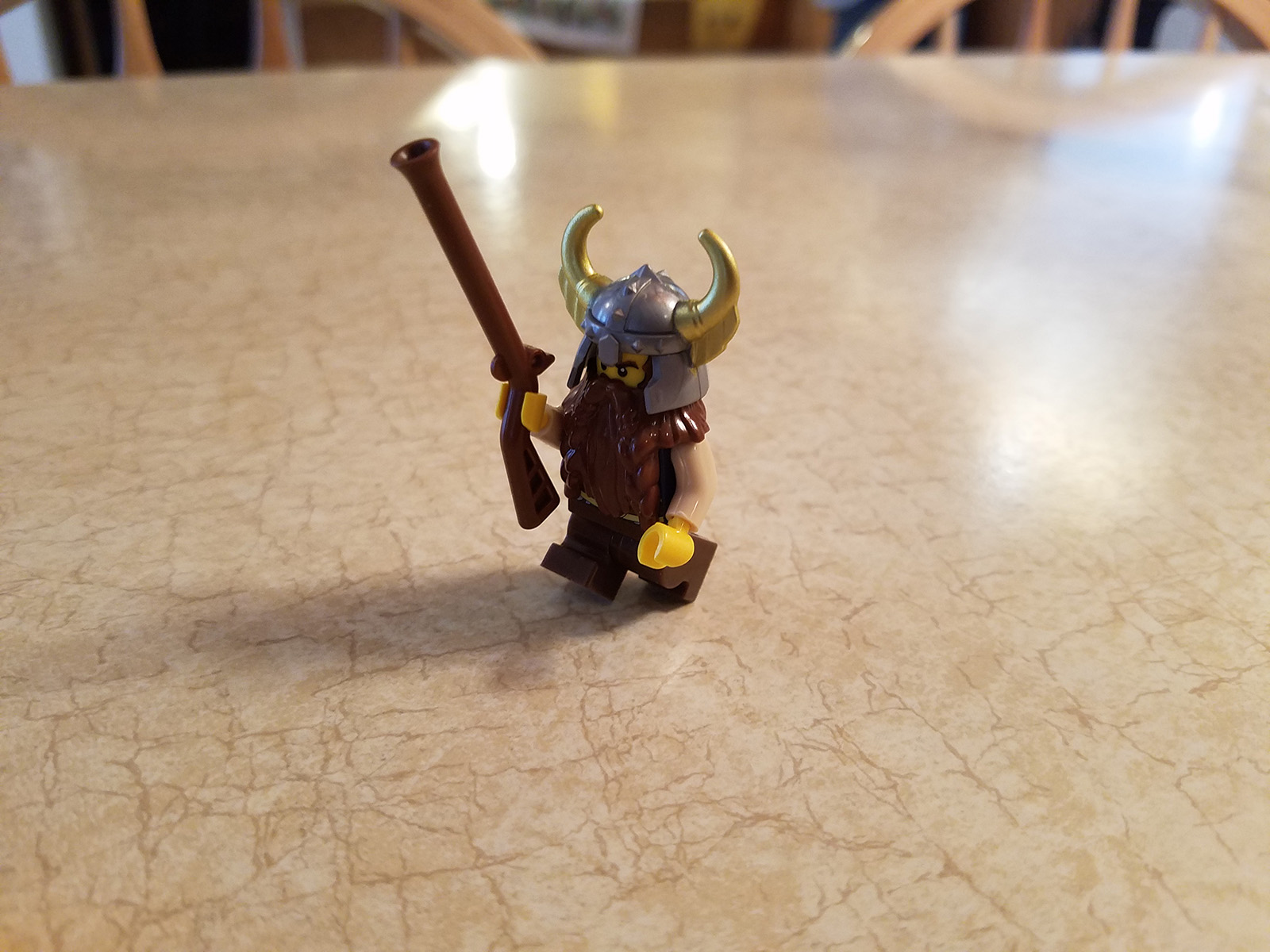 MOVING DWARF LEGS! The beard looks a lot like Gimli's from the LotR sets. And yes, he also comes with a gun, in case you weren't 100% sure this is World of Warcraft. 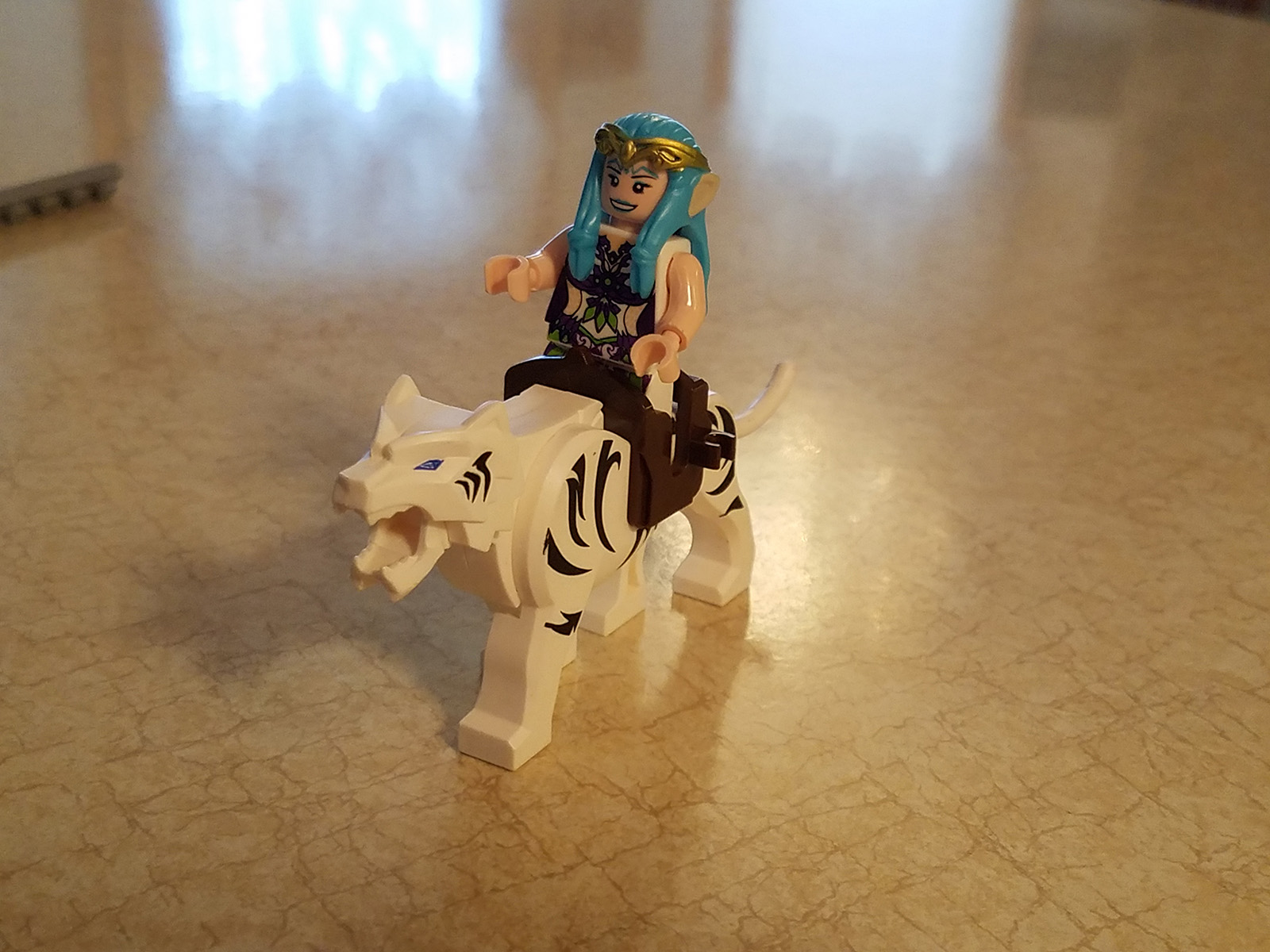 It's Tyrande on her saber cat! The cat mount is one of the main things I wanted from the set. It looks pretty awesome. 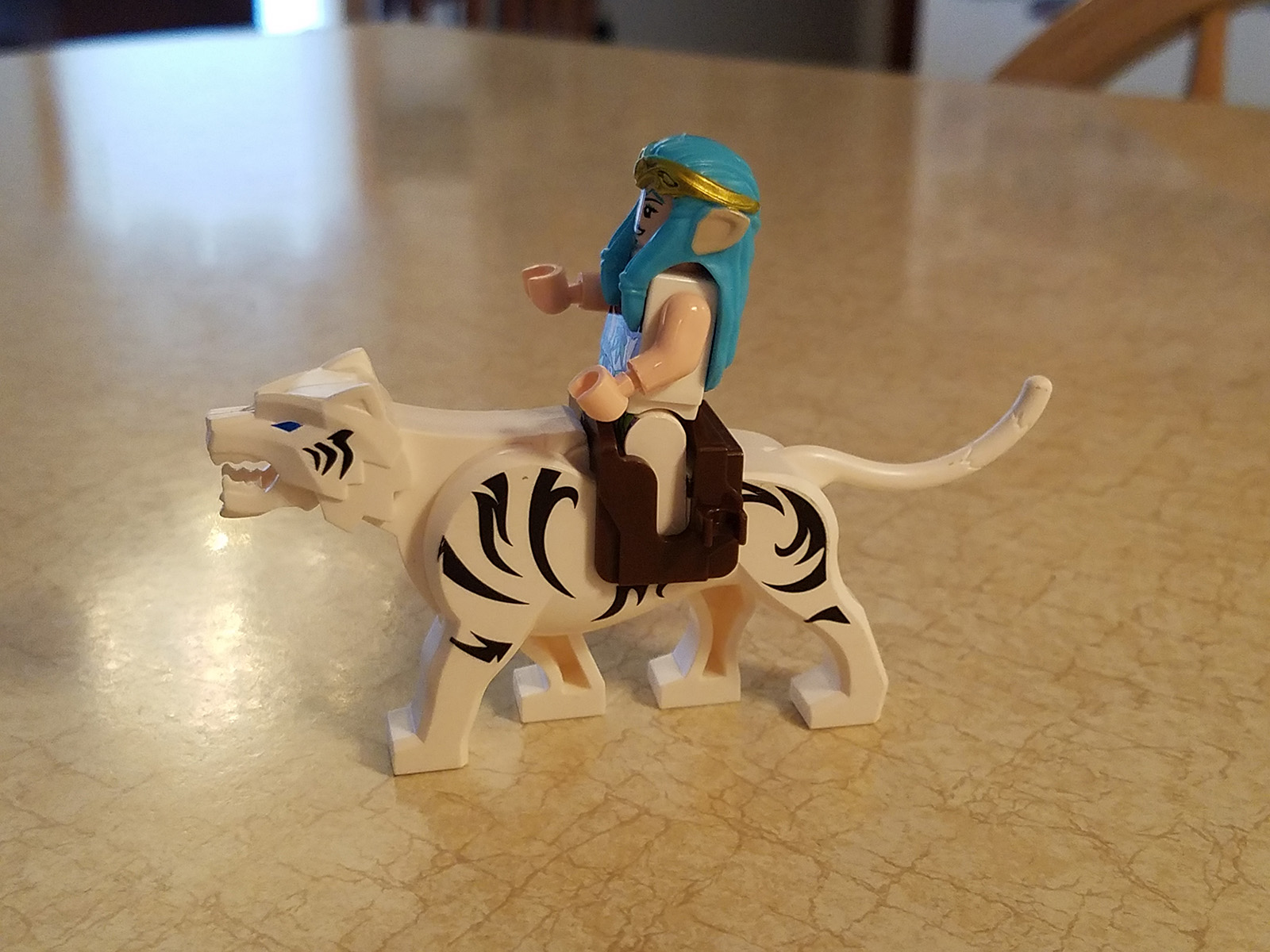 It's also surprisingly articulate, with a hinged tail and opening/closing mouth! Which is more movement than LEGO animals usually offer. 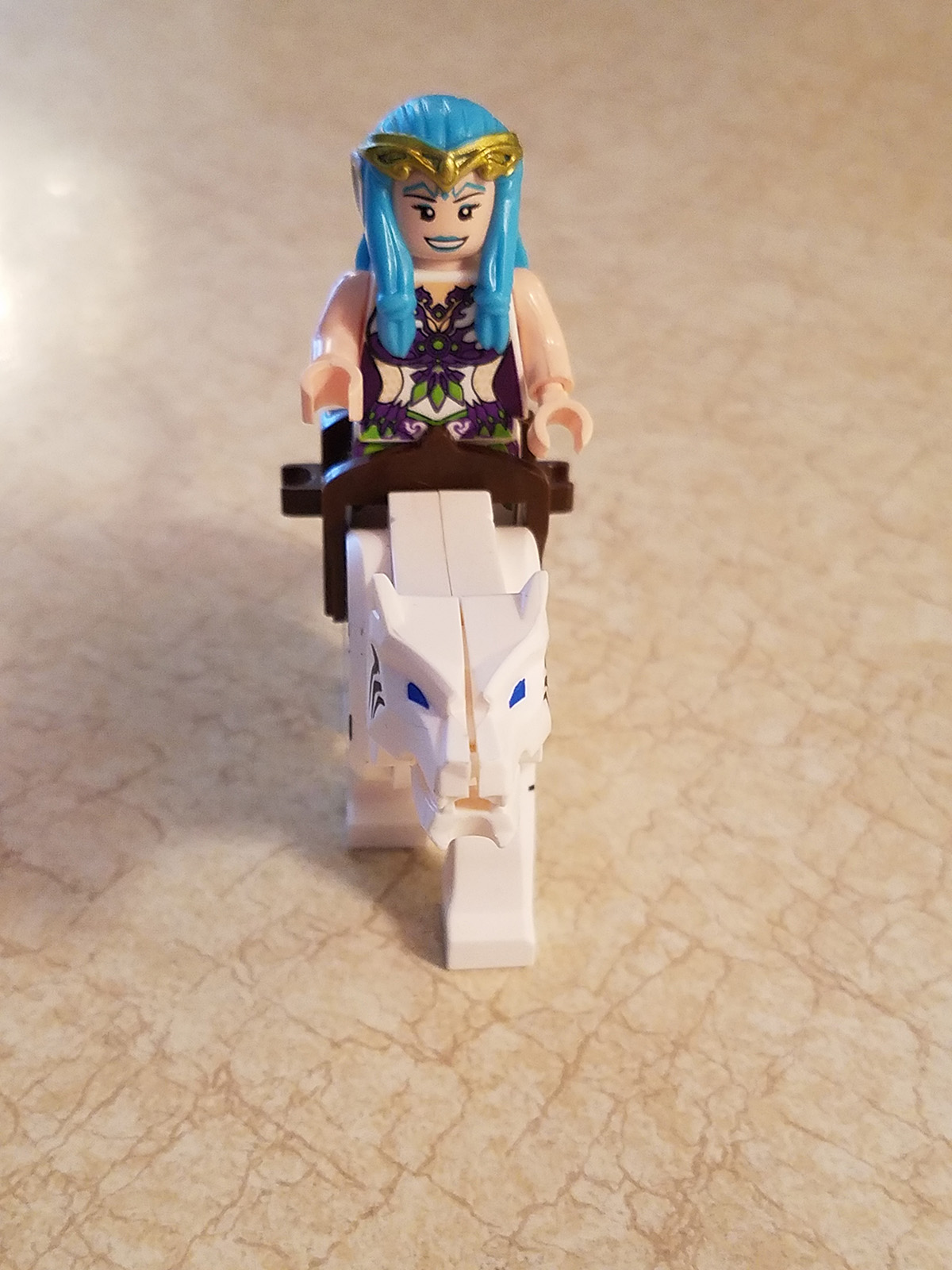 Unfortunately, because of how he's made, his head tends to split down the middle when the jaw is moved, and you have to push the two halves back together again. Not top quality. 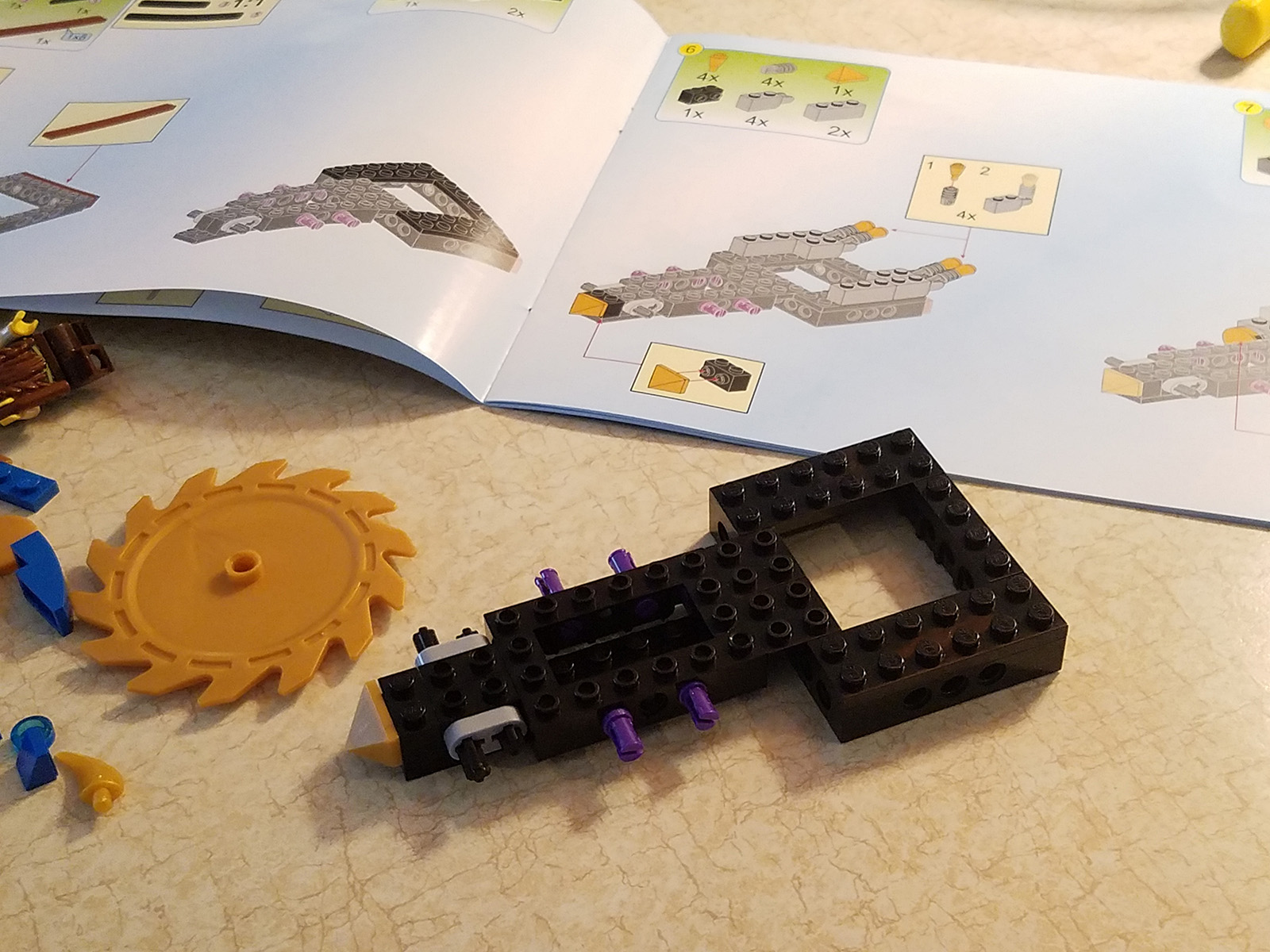 Let's get building! The instructions are quite good, although I noticed one error where a piece in the build didn't render, so it looked like one part was missing from a step. The parts fit together pretty well, though some are a bit too lose or too tight. 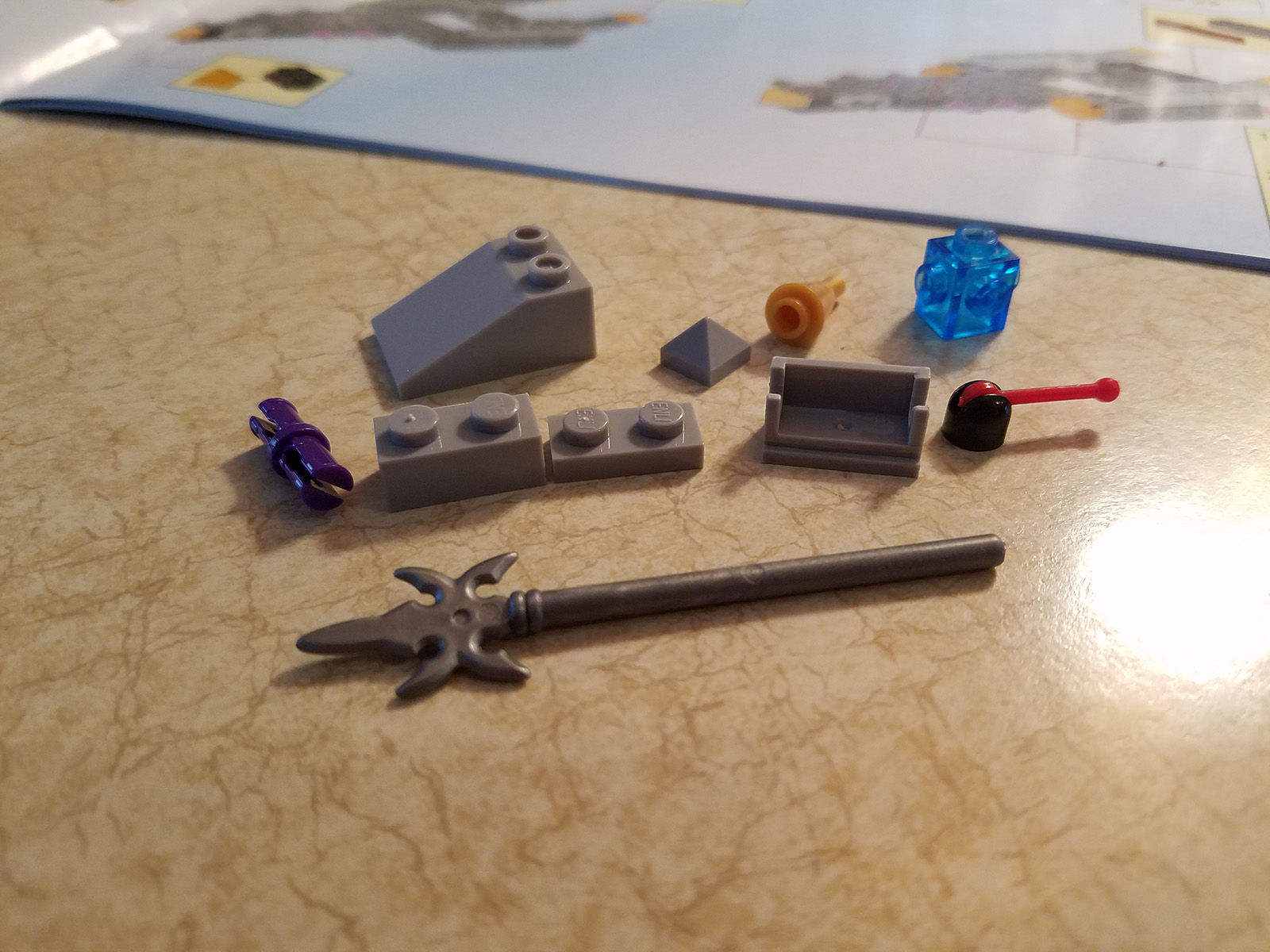 Details of some odd parts. Note the 2-plates-tall brick. Colors seem to be a very close match for LEGO colors. Studs are imprinted with the letters "ENLI" for Enlighten. 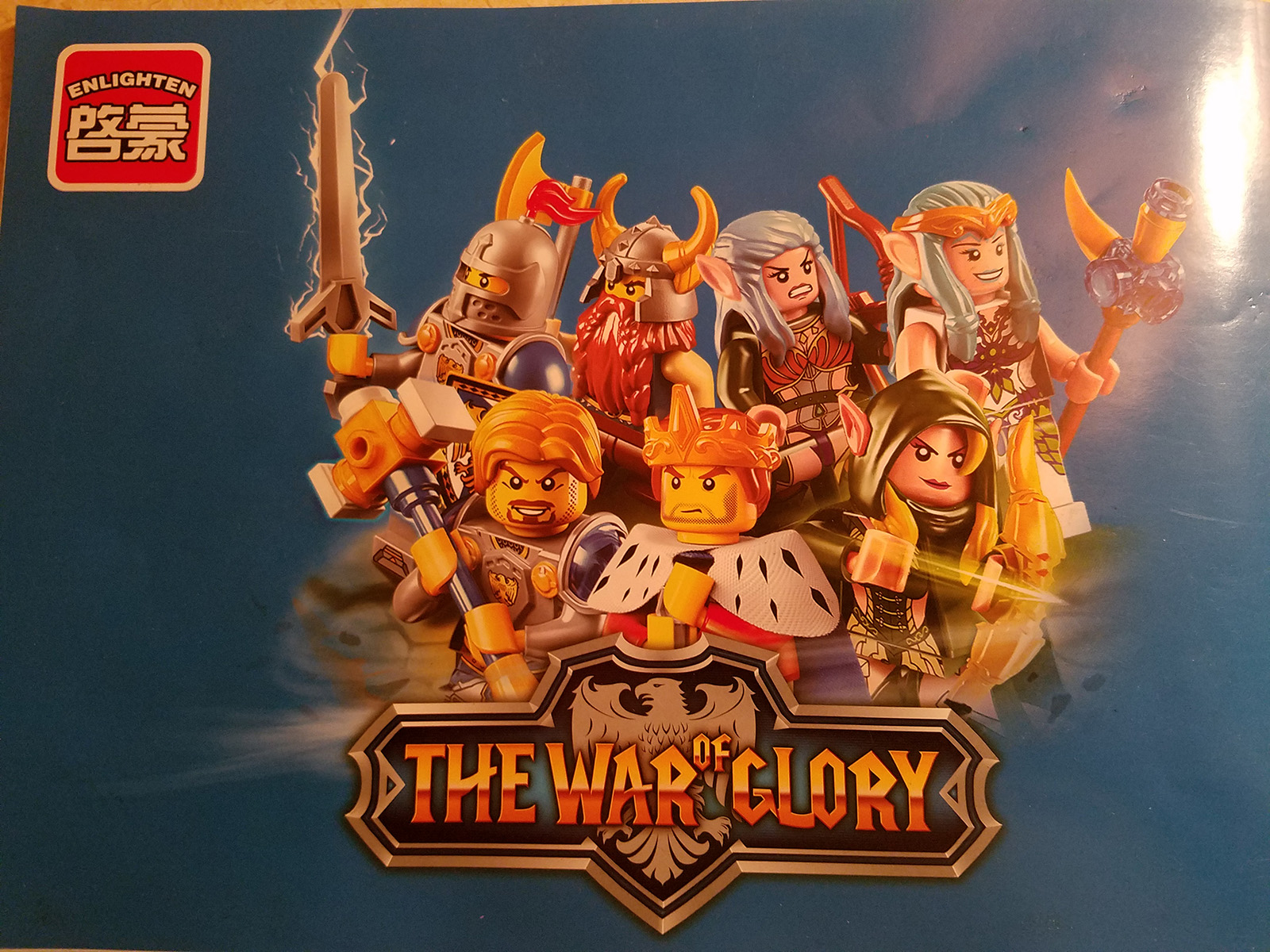 World of Warcraft! I really want a set that includes that elf hood/hair piece. A perfect fit for several WoW characters, like Sylvanas, Alleria, and Valeera. 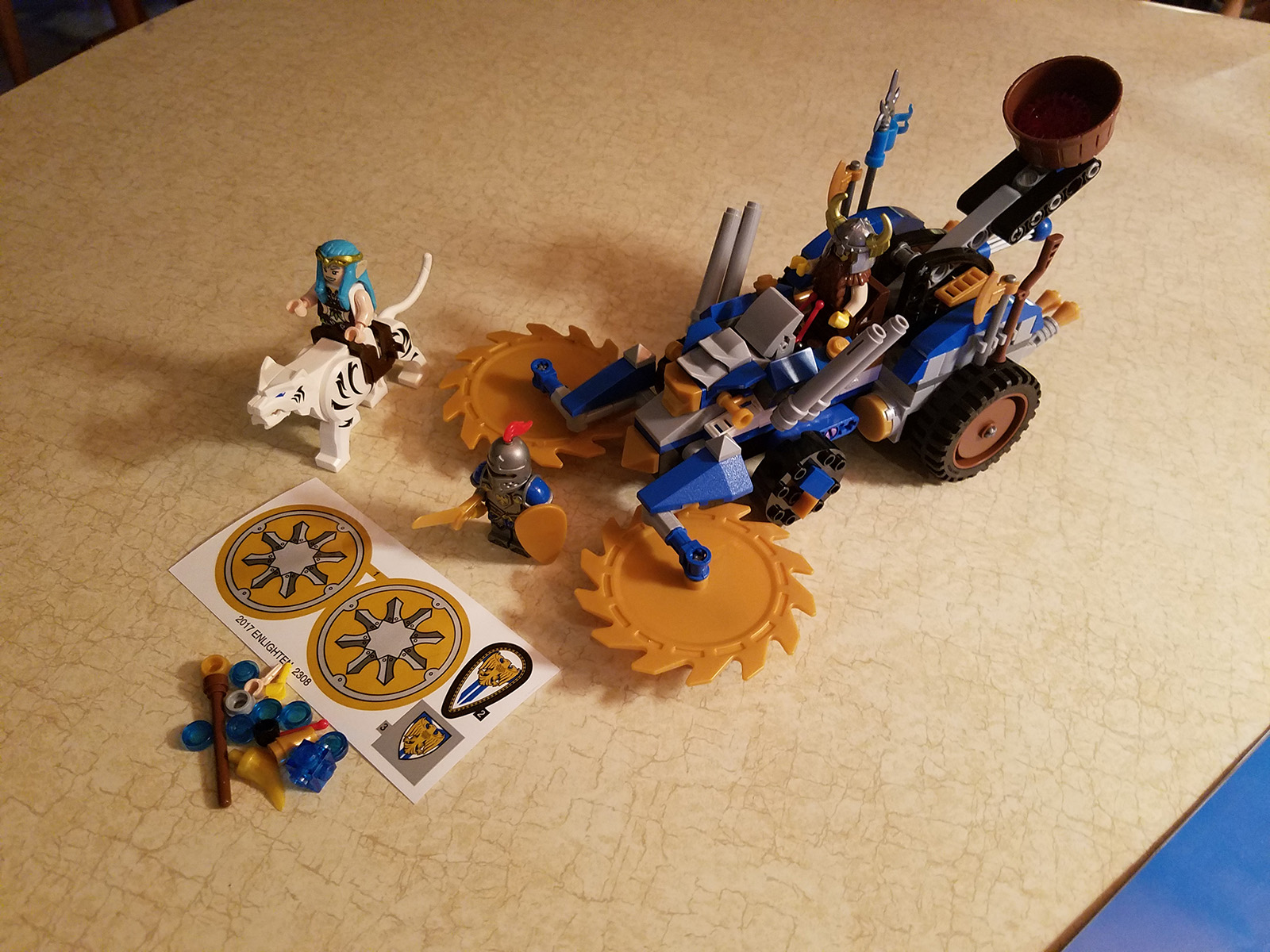 The completed set. I didn't apply any of the stickers.

Overall, I'd say it's a pretty good quality for a Chinese knockoff! Was it worth the price? Ehhhhh, I'm not sure. It was only slightly cheaper than a comparable LEGO set, and since I really only wanted the figure accessories (hair, armor, etc.), it's not a great value for me. I would never use the actual minifigs; the quality is just not up to par. But will I get another set? Honestly, I probably will. I'm looking at this one, if I can scrounge up enough free dollars to blow on it, haha.

I've seen a lot of these where I thought the same thing about the minifig accessories, and I wish they just... sold the figs as collectibles, since that's all I'm really interested in are the armors, weapons, and hair pieces... That said, I wish Lego would look at some of the sets these guys make and do a nice, plain fantasy castle line. No flashy technology gimicks or crazy Ninjago color scheme. I'm not saying it has to be bland classic castle... they can throw in cool monsters, like this guy: 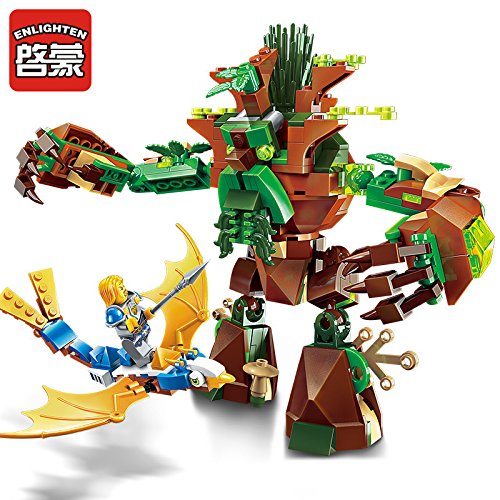 Heck, make a little faction of monster hunters within the line up. Have many factions... I want a coven of witches, a kingdom of elves, a horde of orcs and goblins, a mountain fortress of dwarves... Although, speaking of, I get all my moving dwarf leg needs met by Brick Fortress. Super reasonable prices for awesome little legs that actually come really, really close to LEGO quality, IMO.

One of the few times I wish TLG would steal an idea. Honestly, another Fantasy Era theme would be much appreciated. Shoot, I'd settle for them to make a cityesque theme for castle.

There is a lot of potential out there and none of it has been used. NK felt more like a sudo space theme more than a castle line. I'm hoping 2019 will be a return to an awesome castle theme.

Yeah, exactly - I just want another Fantasy Era Castle line. There was so much more they could have done with that! LotR & the Hobbit sort of replaced it for a while, but then they ended the LotR line early (I honestly feel like they had another wave planned, with Gondor stuff) and now we have nothing...

I'd be happy with any ancient and/or medieval line, fantasy or not. What I'd really like is an Ancient Greek and/or Roman line, but I guess that'll never happen.

Heck, make a little faction of monster hunters within the line up. Have many factions... I want a coven of witches, a kingdom of elves, a horde of orcs and goblins, a mountain fortress of dwarves... Although, speaking of, I get all my moving dwarf leg needs met by Brick Fortress. Super reasonable prices for awesome little legs that actually come really, really close to LEGO quality, IMO.

Ah, there they are. I remember you mentioned those and I looked for them when making my post but couldn't find them. I should probably get some sometime. Honestly, I didn't even know the Enlighten set had moving dwarf legs until I opened it.

I love the custom pieces that come with this, but I hate the anime feel that this has (i.e. fantasy but sci-fi like technology is still there for some reason).

This does remind me of an idea for a Fantasy series of sets that I saw a while ago.

(i.e. fantasy but sci-fi like technology is still there for some reason).

More like steampunk, but yeah, it's World of Warcraft, after all.

Honestly, a little tech in fantasy can be cool. In order for it to balance out, there needs to be a lot of risk in using such tech. Fantasy Era did it right, and had even eluded to elves for that series, which is why many of us thought it was going to continue.

I still suspect the lack of an original castle theme is due to the underwhelming nature of the last line. I personally liked the figs even if the sets were kind of 'meh.'

Been thinking about stealing some ENLIGHTEN designs for siege weapons... and ents...

Huh, that's actually pretty close to some of the older Lego weapons and pieces, like those big, clunky but carve-able swords from that one Knight theme.

I also got a kick out of how they seem to be pitting the industrial might of the humans and dwarves against the druidic magic and entish allies of the pointy-eared hippies *cough cough* elves, instead of the usual orcs/trolls or just evil humans.

All in all, I concur with the desire for more Lego fantasy sets.  I jumped at the chance to get the Medieval Market Village set for my medieval fantasy wants needs, and Nightstalker's idea to expand the City idea for this adaptation would get so much of my money.  Plus Ambad's factions, despite how much fun I have making things like that from existing pieces, it'd be cool to get more unique items and mounts like we're seeing in this knockoff.

I still suspect the lack of an original castle theme is due to the underwhelming nature of the last line. I personally liked the figs even if the sets were kind of 'meh.'

Yeah, the last LEGO Castle line felt really uninspired. It was like "K, guess we're doing a Castle theme again, so let's make some blue lion knights and red dragon knights and generic castles and call it a day".

One of the best sets ever. I think I bought 2 of them. One is still unopened.

Yeah, there are so many Castle-era buildings and things they could make besides just "Castle/Tower with Siege Engine™". They started venturing into "Castle City" territory once, with the village, the blacksmith, and that Kingdoms farm set. Great stuff, but there's still more they could do. Docks and ships! A fortified bridge! A medieval university! Really just do an image search for "Lego Age of Empires" and soak it all in.

Also a cathedral or monastery, but they probably wouldn't want to do something religious, sadly. :\

One of the best sets ever. I think I bought 2 of them. One is still unopened.

Also a cathedral or monastery, but they probably wouldn't want to do something religious, sadly. :\

...Scorp, you know you're my favorite person on this site, right?

Technically, they did, but I doubt it was intentional.

Technically, they did, but I doubt it was intentional.

except they didn't and that whole thing was clickbait garbage

Yeah, that was just a drummed-up nontroversy. I'm pretty sure LEGO didn't actually stop producing it because of the fuss, as that article implies. The set simply reached the end of its run, as all sets do.

Pretty cool set though. One of the last Star Wars sets I bought before I basically stopped buying them entirely. Love the way it fits on top of the rancor pit set.

except they didn't and that whole thing was clickbait garbage

Yeah, that was just a drummed-up nontroversy.

That's what I meant when I said that I doubted that it was intentional.

It's coincidence that they look similar, and this fact got turned into clickbait.