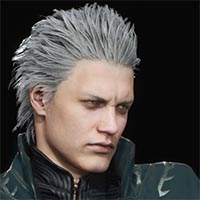 Ladies and gentlemen, you know what it is. Summer E3 is here (a.k.a. Winter E3 for the Bore-thern Hemisphere), and His Excellence, Pope Geoff Keighley, first of His name, King of the Doritos and the First Giraffes, will be gracing us with another of his awards shows. The awards themselves are bunk, obviously, since it's already been announced that Devil May Cry 5 isn't even nominated for GOTY, but we aren't there to watch them anyway. It's all about those HOT. VIDEO. GAME. TRAILERS. BAYBEE. Don't tell me you don't want to see another round of CG trailers for games that won't be out until 2022, because I won't believe you.

But the Keighleys are still a couple of days away, and I thought we could spend the time talking about, y'know, video games or whatever. Throw a top ten at me. Or a top five. Top one, even; I know how it is. Throw some curveballs at me. Make up an award category, I don't mind. And, hey, tell me about movies and books and TV shows and, like, general life stuff, too. I'm not going to ban you for going off-topic in the video game forum. I'll only ban you if you don't pick DMC5 as your GOTY.

I'm going to kick things off with a couple of the smaller prizes:

Backlog GOTY (i.e. an older game that I only played this year): Bloodborne. What a great game! I went from being too scared to even play a From Software to playing Bloodborne for a solid month this year, and eventually getting the Platinum Trophy, and I loved it. You don't need me to tell you about this game, since it's basically all the internet has talked about for the last four years. Turns out everything everyone said was true and it's really good. The combat system with its wonderful Trick Weapons, the level design that leads you deeper and deeper into a gothic nightmare as the game goes on, a cadre of bosses that go from a scary wolf man to an actual, for-realsies Elder God by the end of it all. How many games have you played where you have to hide from a giant alien brain covered in eyeballs imprisoned in the depths of a castle and sending out pulses of other-worldly light that turns you mad if you look at it?

Biggest Stinker: Anthem. Remember Anthem? Remember Bioware? Remember when you found out that they referred to this project as 'Dylan' internally, because they anticipated that it would be THE BOB DYLAN OF VIDEO GAMES?It feels like something from a different epoch. Bioware worked on this thing for like eight years, chewed up and spat out dozens of employees, and I honestly forgot Anthem even came out this year. And I played it to completion!

It's E3 time again, but I'm not going to lie: after Devil May Cry 5 showed up last year, I... I don't really know what to do with myself. Do I still need to haul these old bones out of bed in the middle of the freezing Antipodean Winter nights to watch all this stuff live? Is there still a point to E3 in this post-DMC5 world? Sony isn't even going to be there this year, EA isn't doing a traditional showcase, and as the last E3 before the new generation of consoles gets into full swing, everyone else might be holding their next-gen cards close to their chests anyway.
But, y'know, there's always cool stuff. There's Cyberpunk 2077, that From Software/George R.R. Martin collabo, the Star Wars Jedi one, maybe a Splinter Cell. I want to see whatever Nintendo cooks up. Maybe Rocksteady will reveal the game they've been working on since Arkham Knight came out last century. Microsoft is probably going to show some kind of tech demo of their new Xbox and maybe drop some hints about games. I don't think 2019's E3 is going to go down in history, but I feel like the day I stop getting HOYPE about E3 is the day I admit to myself that I'm an old man and it's all down hill from here, so let's hang on for one more year.
As always, here's a chart I've stolen that has all the conference times in various time zones (look at all those 4am wakeups for UTC+8 ughkillmeeee):

Join me as I watch all these dumb shows about dumb video games and vacillate wildly between super hyped and crushingly disappointed over and over! It's E3 again, baby!