92 replies to this topic

Figured it was time to start a hype/news topic for this game, since I know there are a few other Commanders out there who are bound to be excited.

There is no single upcoming game that I'm more excited about than this. XCOM: Enemy Unknown/Within is one of my absolute favorite games from recent years, and Firaxis is one of the few developers out there who I'm willing to put some faith in.

A quick list of what we can look forward to this time around:

-Canonically, we lost the first game, with all the nations of Earth surrendering to the aliens 20 years ago and XCOM forced into exile as freedom fighters waging a guerrilla war on an occupied Earth. So basically, your first Ironman Classic campaign is canon.

-Instead of a static base, you're now operating out of a captured alien supply ship turned helicarrier called the Avenger. Samuel L. Jackson confirmed to be voicing the Commander.

-This time around the game is PC-exclusive (at least at launch), because Firaxis has realized that they're a PC developer first and foremost. Cry me a river, console peasants.

-Stealth mechanics will be expanded beyond simple line-of-sight screwery, giving you the chance to set up ambushes and the like.

-Maps will be procedurally generated using a sort of quilt system. Building-size sections will be pre-built and arranged to create a new battlefield every time, while still maintaining a certain level of artistic cohesion and niceness and all that fluff.

-Swords and other melee weapons are a thing. Suck it, Bradford.

-Full mod support will be provided this time, with Steam Workshop integration and a suite of editing tools due to be available either on launch day or shortly afterwards.

-Missions will now have alternate objectives beyond simply killing everything, meaning you have have a successful mission without having to engage every alien on the map. To this end, extraction can now be called in from anywhere on the map.

-Dead and wounded soldiers need to be carried by one of your surviving troops for extraction, and a loot system has been implemented where, after killing an enemy, you'll have a limited time to run up to their body and secure your gear. Similarly, any equipment on your downed troops will be lost if you don't pick them up.

I know what I want for Christmas.

EDIT: This looks really cool, I'm liking the story that they've set up, and that Avenger helicarrier thing is sweet. The mod support sounds great as well, allowing even entire campaigns to be created. This iteration seems much, much more tactical which means probably slower gameplay, but that's just me speculating.

-Stealth mechanics will be expanded beyond simple line-of-sight screwery, giving you the chance to set up ambushes and the like.

Thank goodness. The way line of sight worked in the first game was terrible, and was the sole reason I refused to do a playthrough of the game on Ironman.

I noticed you got me the other one on Steam, still need to finish installing it but I definitely am interested in pretty much anything squad tactics so I think I'll have fun.

That said I can't really comment on anything about gameplay improvements/changes except that it all seems very intriguing so I'll finish downloading (gotta get the queue cleared out for summer sales!) and play through EU and see what I think of it.

On a more relevant note is this really going to be X-COM 2? Weren't there 2 or 3 other games in the series (not talking about the fps spinoff)? It always bugs me when developers do that, it's the whole Wolfenstein problem all over again

Enemy Unknown, as far as I know, was a reboot of the franchise, and I think Declassified was an unrelated spin-off (or if it was directly related, it didn't really have any effect on EU).  So I think it is XCOM 2, but for a different continuity than the originals.

Yeah, Enemy Unknown is a total reboot of the franchise, with The Bureau as a prequel.

The original series had five games in it, but none of them were numbered, so I guess it's OK for this one to be a 2?

That Ranger definitely has some cool abilities and is sort of bridging Assault with scout qualities. like scaling walls or using hit-and-run attacks. He/she can unlock a move where each melee kill allows another move, like the Grim Reaper's Sprint from Fallout. I can see that being pretty useful.

This story though? Makes everything I did in the first game pointless. So much for breaking my back and savestating to protect this damn planet. Will Enemy Within things like hats and MELD be coming back too?

I really hope they bring back MELD. I'd love to see some stealthier/guerilla-y styled MEC units.

I'd just like it if we actually got to see some of Shen's constant massive foreshadowing about Meld, Gene Modding, and the MEC augmentations actually produce something instead of just being fluff. I mean, yeah, having your troops lose their limbs is kinda dark, but at the same time those robot arms and legs are frakking metal as frak.

Don't mind the story changes too much, though. One of the Firaxis guys (I think Solomon) had mentioned a few months ago that

Spoiler
The Volunteer was teleported away from the Temple Ship and didn't die, so I'm thinking that our efforts were not in vain. Possibly some timey-wimey screwiness, since there was a black hole forming and all.

Hmm, I wonder if MECs could use melee weapons other than the rocket fist...And that thing was so OP, no cool down, and 18 damage every time when upgraded.

bradford is coming back

EDIT: As part of the Steam Summer Wallet Wrecking, the whole franchise is on sale. $9.99 will get you Enemy Unknown plus all DLC, while $7.50 can snag you all of the classic pre-reboot games.

EDIT: As part of the Steam Summer Wallet Wrecking, the whole franchise is on sale. $9.99 will get you Enemy Unknown plus all DLC, while $7.50 can snag you all of the classic pre-reboot games.

For anyone interested, I strongly recommend getting the Enemy Within pack to go along with the main game. XCOM Enemy Unknown was a great game, but with the addition of Enemy Within, it became one of my all-time favorites. The addition of mechs makes the game's annoying habit of throwing thin men at you much easier to deal with, as nothing surprises the rocket fist, and the added customization options and enemy types keep the game fresh.

In other news, the new Sectoids can raise the dead. 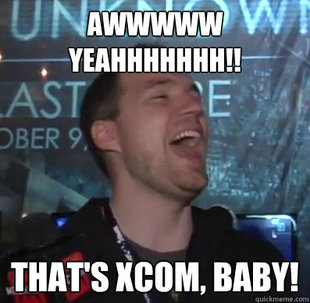 Hey, at least they don't raise the dead immediately after they kill them, and then the dead burst into fresh Chryssalids within a handful of turns...

Then again, these undead get guns. So I suppose it balances out.

Hey, at least they don't raise the dead immediately after they kill them, and then the dead burst into fresh Chryssalids within a handful of turns...

Then again, these undead get guns. So I suppose it balances out.

Considering the two revealed aliens have been buffed, I can only imagine a buffed Chryssalid and the glorious Sectopod are to come. Be afraid, be very afraid.

You know, it never said that the war ended after Operation Avenger (final mission) in Enemy Unknown/Within.  Just because XCOM took out the Temple Ship and the Ethereal in charge doesn't mean it was the only one.  It was more or less a stance to show what the XCOM project could do.  After all, the first Terror mission is "supposed" (Generally how quickly you take it out or how long you wait)) to take after you destroy the hidden alien base and encounter the Sectoid Commander for the first tame.  So more than likely the Aliens continued their attack on Earth even after the destruction of the Temple Ship, which is when the Council of Nations decided to surrender and leave XCOM forces scattered.  Which would then explain the ballistic weapons held by XCOM guerrillas in the XCOM2 trailer and not plasma or even laser weapons that your soldiers would be weilding towards the end.  If you remember, you needed the alien parts (alloys, weapon fragments, and elerium, or even Meld in EW) to create anything AFTER the basic gear.  The basic ballistic weapons and body armor was the only thing the XCOM project could manufacture with gear supplied by the Council of Nations.