My Entry, better late than never!

Tails of this Kitsune have been told for centuries. Due to its murky and unknown past, it has gained fame particularly in the far-east where it originated from. What is known about this great Kitsune, is met with a reserved curiosity, many not knowing whether it is friend or foe. Kagayaku means shining in Japanese and this name was bestowed upon him for his shining gold coat of fur. Out of the two types of Kitsune, it is said that Kagayaku is of the Zenko variety, thought to be benevolent if a traveler ever has the fortune of crossing paths with this legendary creature. Although Kitsunes are generally thought of as tricksters, Kagayaku's nine tails speak to its wisdom and omniscient nature.

It is said that Kitsune's gain wisdom, as well as age and a further level of divinity with each tail they gain until the ninth tail when they grow a white or gold coat of fur. Upon a ninth tail, the Kitsune becomes fully omniscient and extremely powerful, thought to even become immortal.

Kagayaku, although extremely clever and wise, is said to be overconfident. He is so confident that he moves quicker and more stealthily than human eyes can see, that he is said to grant unbelievable knowledge to any who gaze upon him. While few have claimed that they have laid eyes upon Kagayaku, those that have are said to be changed permanently. They are more stoic in nature and have a new understanding to the answers that vex them, as well as what their future will hold. In the Far-East there are still many who fear Kagayaku and the magic that he possesses, but there are also those who worship him. They often follow a life in search of wisdom and purity hoping to one day gaze upon The Golden Kitsune and forever have their fortunes and futures changed.

My monster’s name is the Barqani Fishman. The Barqani lived in tribes near and in the ocean, hidden from humans. But once they were spotted diving into the water by a poor boy that lived in a nearby town. He reported the sighting and the Venatori were sent out to slay them. The Venatori waited on the shore for the Barqani Fish people to come to the surface. Once they did, the Venatori started slaying as much Fishmen as they could. The Barqani were fighting as hard as they could but were outnumbered. Seven Barqani were left standing. Six of them retreated into the water and swam away never to be heard from again. But one Barqani still remained. Through the power of rage that one Barqani slaughtered all of the remaining Venatori. He now lives in the ocean searching for the remaining members of his tribe. 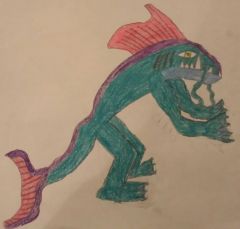 Many, many years ago, there lived a young noblewoman of Kehmet named Rashida. She was blessed with a gorgeous countenance, with hair straight as an arrow and darker than the rich soil of the Yter's bountiful banks. Her beauty paled in comparison to her most personally prized asset: a mind blessed with Thoth's wisdom, and a devious cunning worthy of Set. However, her peers would never acknowledge her brilliance, ignoring her opinions on politics and policy and her radical suggestions for how to improve the kingdom. The influence she possessed fell far short of slaking her thirst for power. It could not sate her ambition. So, young Rashida decided to find an alternate path to change her station.

Turning to a fallen priest of Anubis, Rashida released her latent "gift" and awakened her potential through the forbidden, inhuman art of necromancy. After years of diligent study and practice, she was finally ready to take her rightful place in the world. Rashida gathered her closest friends and followers, enthralled by her taboo power, and had herself mummified and converted into a true abomination of nature. A mortal being defying the laws of nature and the absolutism of death, Rashida became a Lich: a nigh unkillable, monstrous necromancer.

Empowered by undeath, Rashida proclaimed herself the Lich Queen of Kehmet and began to building her Necropolis. The Lich crafted her loyal acolytes into powerful revenants to serve as her advisers, agents, and generals: her far reaching Black Hands of Death to send off into the world to do her bidding. Gradually, subtly, she began gathering victims and souls to bolster the ranks of her shambling dead army, and using them to construct a labyrinthine and deadly tomb hidden deep within the desert. The gloomy and wicked construct serves as Queen Rashida's seat of power, and her hiding place for the artifacts she bound the pieces of her wicked soul to. A massive complex ridden with traps and guards, and massive barracks to house her shambling soldiers, rotting reverants, skeletal cavalry, and the prize of her kingdom: A terrible necrogolem, tall as a two story house with hands that could topple kingdoms. It was painstakingly created after a long, arduous hunt to slay a giant and drag it back to Kehmet for reanimation.

Despite her vast forces and her ever increasing control of black magic, The Lich Queen Rashida always considered herself a perfectionist. Throughout all this she was careful to conceal her efforts, pick up unfortunate "conscripts" one at a time, and not draw any attention to her swelling army of darkness. For now she sits, biding her time plotting, bolstering her forces and becoming stronger. Her grand schemes to control Kehmet almost at hand, The Lich grows ever closer to unleashing her wrath upon Kemhet: to make those who shunned her listen, to fix the kingdom as she sees fit, and to make her title as The Lich Queen of Kehmet... indisputable.

“Out of the darkness they came. They were as men, but men of blue fire. Their touch burned like ice, their feet left no tracks. Garbed in shreds of cloth and ancient armor they were and many were slain as they passed. We few who escaped did not run fast in enough…they allowed us to live.”

-excerpt from The Reclamation of the Old Relics, or Of the Ruin of the Wastes, by Anonymous

Some lucky few beings survived the horror now known as the Cataclysm. When reality warped, their souls were ripped from their bodies and transformed, doomed to wander the Blasted Wastes until the end of days. Little else is known of them; no one knows if there are any more or any less since they were created or if they can be killed. There are always stories of people lucky enough to drive them off or perhaps steal from their vast treasure hoards (not that any are known to exist; the common perception is that anything so powerful would require riches for whatever reason monsters take them). They have no common name, though anyone who has seen one usually knows it by its description.

They are not alone in the Blasted Wastes; many abominations wander the ruined landscape. But they are by far the most recognizable and (perhaps because of that) among the most feared.

TL, DR: Picture a race semi-corporeal ghosts made of fire that burns blue (and intensely cold). They haunt the most inhospitable place in the known world and no one has any idea whether or not they can be killed or make more somehow. Simple, right? And since that's about as much as I ever figured out in a month of planning, I figure that's all anyone else gets to know.

Told you I'd get something in.

Technically I was going to close the contest about an hour ago, but since I know at least one person is still working on their entry, I'll leave the thread open for tonight at least. To make things fair, if anyone else needs more time for whatever reason, just reply and ask. Otherwise, I'll close the thread some time tomorrow. And the judging will begin soon after!

In the meantime, if anyone doesn't see their entry in the list at the bottom of the main post, please let me know!

So how many months will the judging period last?

Okay then, THE CONTEST IS NOW CLOSED! Big thanks to everyone who entered!

So how many months will the judging period last?

None - Wolfy and I are judging it by ourselves. Results should be up within a week at most.