20 replies to this topic

Fine. I'm making a topic. Guys. I hate to tell you this: you may not want to hear it, but Forza is best car game now.

Horizon 2 is best car game ever of all time, but that throne looks to be challenged by its new baby brother.

Forza has been killing it lately. With the announcement that they're all going to be on PC from here on out, and the release of that Forza 6 Apex thing on PC actually being an excellent PC port (and free!), they're earning some serious credit.

I poured some serious hours into the first Horizon a couple of years ago and I absolutely loved it. I'm a big driving simulator dork, but I also love cruising around in open world games, and Horizon was the first game ever to mix those two great tastes. I like to turn off all the driving assist options, go Manual with Clutch and pretend I'm actually driving for reals. Sometimes I'll go fast as possible, sometimes I'll switch to a higher gear and just cruise and watch the scenery. And then I'll get sick of that and throw out a filthy downshift and try to drift it up for a while. I love it.

So, yep, gonna be all over Horizon 3. I hope you don't have to do too much of the off-road stuff to progress, but I can't imagine it'll be a problem. Sleeping Dogs is the only game I've ever played where you actually drive on the right (which is to say left) side of the road, so it's about time we got another

Some details about Horizon 3

Some highlights include:
-Wildlife wasn't just for the trailer. It's in the game too.
-350+/- cars at launch
-You're the boss of the Horizon Festival from the get go. You decide where things go. AND you can design custom races!
-Map is twice the size of Horizon 2's
-More music stations (including one that streams music files from your OneDrive storage)

As someone who jumped on the Forza bandwagon with Forza 5 and then LOVED Horizon 2, I am really excited for this game. I am a big fan of nice cars and cruising around in them, and Forza does a great job of making every car feel different from all the other cars.

Here's some gameplay (low quality audio, but video is ok)

Stealing from this breakdown.

So, this might be a mistake, but what do you brosephalopods think about Forza's place in the larger world of racing games and driving simulators?

I used to be a Gran Turismo man, but that series has been resting on its laurels for years now. The decision to release GT6 on the PS3 just a month or two before the PS4 launched was so dumb, and now we're finally getting a GT game on PS4 and it turns out to be a bloody online-only eSports game with no singleplayer races. GT5 and 6 are both bloated messes, suffering from years of unchecked bad design decisions; stuff that was charmingly awkward back in the PS2 days is just a pain in this day and age. You still have to set your driving aide settings individually for every car you buy, there's still no way to change the difficulty level of a race beyond just showing up in a faster or slower car, the load times are still awful, half the cars are still PS2 models that they haven't bothered to update; it's a mess.

With no Xbox and no GT, I've been getting my driving sim fix on PS4 from Project CARS, but that game's kind of a jank factory. It has a fantastic lineup of tracks, great options for weather, day/night, number of opponents and that kind of thing, but it just isn't very well polished. It doesn't feel good to drive with a controller until you go into a giant, intimidating Options Menu and tweak a million settings, and I'm just not into that. I want to turn off all the driving aides and get out there and burn up the track, y'know? Then there are all those PC-only driving sims like iRacing and Assetto Corsa, but I feel too intimidated to get into those

For a long time I thought of Forza as the second best driving sim after Gran Turismo, but at this point I think the tables have turned. From what I've played of the Forza 6 Apex thing on Windows 10, the driving physics are right up there with GT in terms of realistic squirreliness, and it has all the user-friendliness that GT completely lacks. And when you consider that the game Polyphony Digital has been working on for all this time, GT Sport, is apparently an online-only eSports game with no singleplayer races, it really feels like Forza is picking up the slack. GT Sport is probably going to be the first GT game I don't buy, and I've been getting'em since the first one on PSX, while Forza games just seem to be getting better and better every time.

Forza is the king of both sim and arcade racing atm IMO.

Motorsport is always consistently good for that track/general racing feel if you're going for a sim experience.

Horizon meanwhile, keeps the sim if you want it, but is by no means the only way to play. By default, it's a mix of sim and arcade settings to provide maximum fun value for your average gamer.

And also music. Music is like the other 50% of the Horizon experience. And Playground have excellent taste in it.

Horizon 3's soundtrack has been revealed AKA 50% of the reason Horizon exists. And it seems like a nice selection.

Including 'The Trials' from Halo 5's OST 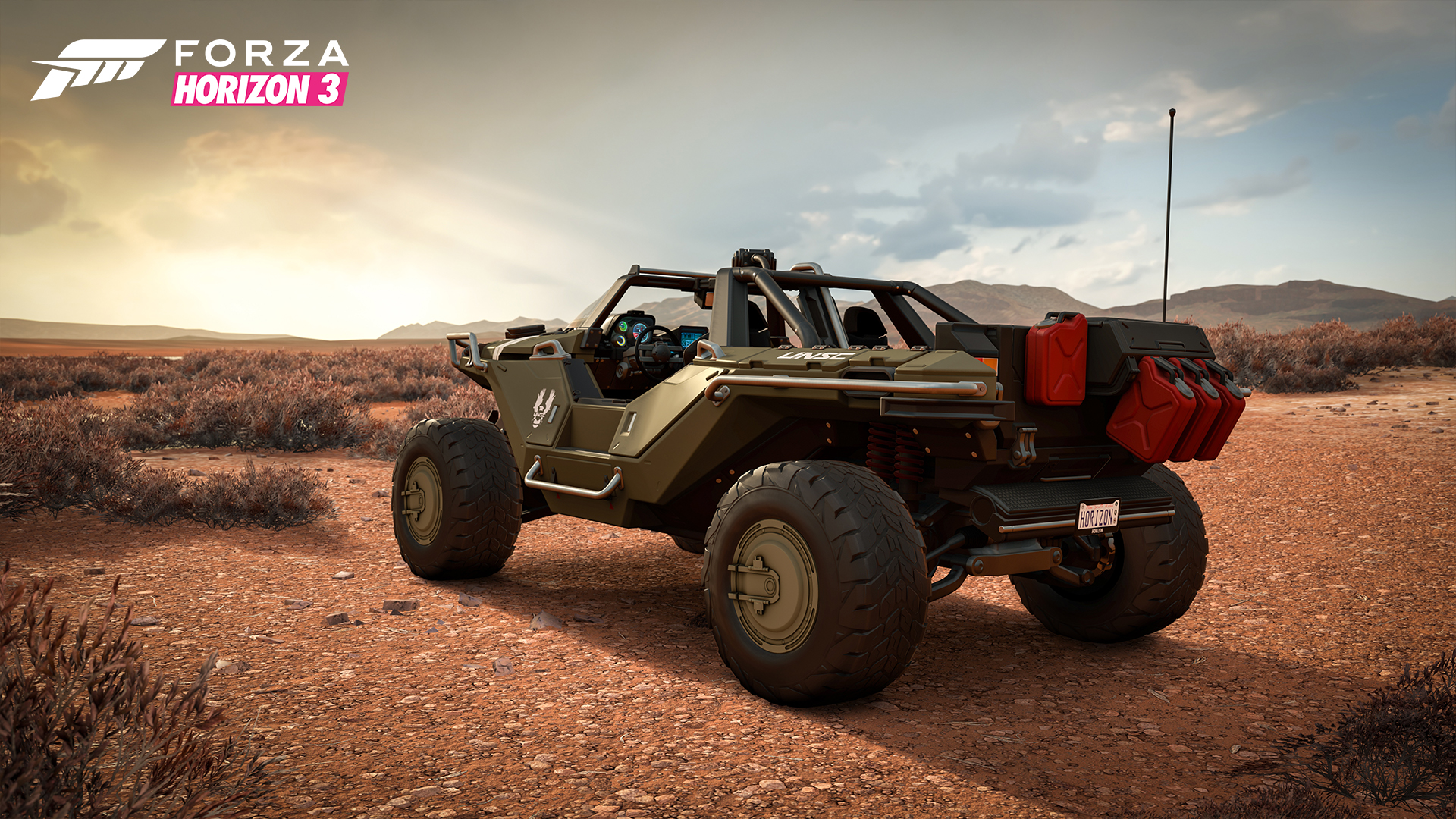 And there's a Horizon 3 Demo dropping tomorrow on X1 and PC. This has been your latest Forza update.

Are you guys ready for Forza to take its rightful place on the car game throne once and for all?

Because I'm a tool, I sprung for the ultimate edition on digital...so my weekend plans are squared away. And that also means I'll have a PC copy for whenever mine is up to snuff.

EDIT: Because I never get tired of this:

What was in the Ultimate Edition? More cars or something?

I'm going to be playing the waiting game on this one. Microsoft has made it clear they don't want any Australians buying this game that is set in Australia by pricing the PC version at $99.95, which is a full twenty dollarydoos above even the price of a physical Xbox One copy. Buying a game on the Windows 10 store is already a thoroughly unenticing proposition because it's just such a rubbish application, the last thing I want to do is to pay double what I pay for every other PC game.

Ocey, could you buy the Xbone physical version, never use it, and unlock the pc version using that "play anywhere" thing?

Ocey, could you buy the Xbone physical version, never use it, and unlock the pc version using that "play anywhere" thing?

It only works with digital purchases, I think. You buy either an Xbox One or PC version digitally and the other one gets added to your Xbox account automatically, which unfortunately makes it so you can't even buy a code off someone who doesn't want to use theirs like you could with Quantum Break.

Oh well, I'll live. Maybe if that PC demo ever comes out it'll win me over and I'll have to bite the bullet, but I kind of doubt it.

That honestly sucks. :/ I wish there was some way I could let you use my PC copy instead of it collecting dust until my PC is beefed.

I just saw this PC screenshot on NeoGAF and all the Australian-ness hit me so hard:

The hotel with the wooden balcony railing, the parking meters, the rubbish bins, the phone booth, that telephone pole with the ladder rungs sticking out of it, that zebra crossing sign, all those tin roofs in the distance. The palm trees seem a bit out of place to me, but I'm pretty sure the game's set in Queensland and I don't know what kind of crazy trees those weirdos have up there so maybe it's authentic. I might have to find a way to buy this game from some other region.

Creating a club for SSLF if anyone wants to join when they get the game. Just shoot me a request, and I'll invite you in. (Couldn't use SSLF for the tag for some reason, so I went with the next best thing)

Yeah, why not.  Might as well join one, and saves me from creating one that only I would use anyway.

Should probably mention I need you MS account/XBL gamertag name to shoot an invite.

Forza Horizon 3 got its October Update on PC. It claims to have addressed some of the performance issues plaguing the game, such as frame rate drops, but if you read the comments and go to NeoGAF, it seems that this has made the game worse for some players and better for others.

Also, some players, when downloading the patch, ended up having to download the entire 50+ GB game again.

BUT AT LEAST THE DLC WORKS WITH IT. D:

It's a shame. I hope they iron out the fixes soon. I was getting some stutter when I tried playing it earlier this week--nothing game breaking, but very noticeable. The game is super good and fun to play, but the PC port could use some work. Some are saying it's as bad as Arkham Knight, which I think is silly, but having not played Arkham Knight, I don't know for sure.

Depending on how bad the stutter is the next time I start it, I may be locking it to 30. I would prefer 60 FPS, but when the framerate changes it's very noticeable to me.

I'm playing Forza Horizon now. I need friends. If anyone on here is playing it on either Xbone or PC, please add Ryoma90.