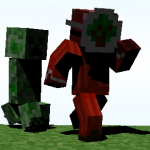 You'll want to be seeing this.

I am going to be getting Minecraft soon and I plan to achieve many feats in it.

I was wondering, do any of you SSLFers play Minecraft?

Does anyone have any cool pointers to give me a hand beginning?

What cool stuff have you made?

Procrastination has some benefits...

Well, everyone else seems to be doing it...

This is an image I drew a while ago of two good friends...Image
The noses aren't too good but I spent most of my time on the rest.

More coming once I get my scanner warmed up.

Extraordinary Events in a Mediocre Town.

"Extraordinary Events in a Mediocre Town." or EEMT is a comic I am currently producing set in modern times in a very Mediocre Town.

I am in need of 10-15 extra cast members, to play roles of Neighbours, Policemen, Handymen, etc.

I will review each sign-up personally and decide whether I want your character in my comic.

Important Note: Due to my Advertisement Link with So...What's It Called?, Participants in the So... What's It Called Comic Competition have a better chance at acceptance into the comic.

Here is a short description of the town:

The inhabitants of Meady Acres all live in average houses, work average jobs with average pay and average relationships. Their sense of individuality is held only in the way they dress, The car they drive and their personality. Every day of their lives can only be recorded as "average", every day until now.

Return of Jerry Man and His Decal Workshop!

Hey guys, I am back!! I sorted out my issues and having a nice life and decal making is back on my to do list.

Here's a head from Grom's Character in So...What's It Called. First off, this is the first story I have felt happy enough with to post in public, so I hope you enjoy it and can give some constructive criticism and ideas on where to go from here.

This is more of a teaser chapter than the real deal but I was testing my writing skills when under pressure.

The following Prologue was written in about 50 minutes to an hour.

Author Notes will be in this dark red italics.
Grace moved from shadow to shadow, fully aware of the thin man tailing her as she crept. He had started trailing her about seven blocks back. She ran around the alleyways and backstreets of the busy town, trying to shake him, but he seemed to be able to catch up within milliseconds, she had even seen him before her at some times, causing her to turn and change directions.

A thick black cloak was thrown around her, with large sleeves. A hood made of slightly thinner material shielded her face she let out a small murmur about the cold. It must have been close to freezing because small layers of snow were building up on the rooftops. Grace took note of the larger pile on one rooftop and threw a rock at it, cutting off the path behind her. She rounded the last corner on the way out of town and he was standing there, knife drawn.

Watching the man very carefully, she jumped around the corner. The man ran after, looking all around the dead-end alley. Nothing. All he saw was a rabbit, a rubbish pile and a pile of boxes. He shooed the rabbit out of the alley and started hacking at the boxes, in case the fugitive was hiding under them. After the disappointment of the empty boxes he started hacking at the rubbish. Nobody was there. She had disappeared.

Grace hopped into an abandoned guardhouse, shook the snow off her fur and shifted back to human form. She disliked the form of a rabbit, but it had its advantages. After all, nobody expects the rabbit.

She sprinted back into the town, hoping the man would not see her and follow. He did. He caught he shadow out of the corner of his eye and ran after her. The pursuit began again, jumping, ducking, weaving and dodging, each time Grace was gaining a lead the man would close the gap using a shortcut. She decided that the best defence is a good offence, and ran, thinking of a plan to attack.

She slunk around a corner and stopped. The man peeked is head around the corner and saw her standing there eyes glaring, less than 20 centimetres from his face. He drew his dagger but as he held it up she swiftly kicked it out of his hand, knocking it 3 metres away. She then followed through with a turn, skip and then ran out of the alleys into the open street, cloak billowing in the wind as she ran.

The man pursued her, taking as many back alleys and shortcuts as he could to keep up. He followed her for what seemed like hours before he finally saw her stop in an outcrop of the forest east of town. He approached her slowly ready to take her by surprise. She moved her leg out behind her as he came close, knocking him off his feet. She turned to face him, put her foot on his chest and said, "Why do you follow me?"

"Bring It." Grace snarled as she let him go baring her fists, "Fist fight?"

She took a step back flicked her wrists and out of her sleeves flung two razor sharp daggers into her hands. She stood feet shoulder width apart and knives spinning in her hands. "Ready?"

She lunged forward but was countered with a dodge to the left. The man threw a swing at her as he pulled a knife from his scabbard, missing her entirely. Grace attempted to lunge and attack the man once more, another perfect counter. Grace continued to lunge and jump and stab at her enemy, but each time she saw an opportunity the man closed it and countered with amazing accuracy.


Grace watched as the man ran towards her raising his knife for a stab to the heart, she dashed to her left and avoided the attack, breathing a sigh of relief before the man was upon her once more.


The fight moved through the forest, leaving a trail of cuts and trampled ferns behind them, still neither person hitting their opponent. The stalemate continued for a long time, each move countered perfectly, until Grace used her power.

She ran toward a tree, ran up the trunk slightly then threw herself off, catapulting over her enemy, while shifting wings of her second base form, the eagle, onto her back, arms raised and daggers ready. She dove at him, catching him in the moment of surprise only to see him disappear before her and appear 3 metres behind. She turned back to her normal form.

She ran at him, stopping a metre ahead of him and turned sharply to the left and raised her left hand, holding a sharp dagger. There was a flash of light, and in the blink of an eye the man was next to her. He looked down to see that the blade of her dagger had pierced the armour on his side, gashing vertically, hitting his thumb on the exit.

His eyes flared red and then he disappeared leaving only a pool of blood and a small scrap of paper.

Grace bent down and picked it up, turning it over in her hand. There were strange markings of some sort, probably a foreign writing, and a diagram, she was not sure what of. After much thought she decided to take it to her brother to see if he could figure what it meant...

That finishes the Prologue type chapter. If you have any ideas or constructive criticism please post it on here or PM me.