Captain America 3: Civil War is due for release exactly one year from today, and it looks AWESOME! The Civil War was a big event in the Marvel universe, where I think a school got blown up by a superpowered dude and it sparked a debate about whether superpowered individuals should have to make themselves known to the government and be registered on a list and give up their secret identities. Iron Man was for, Cap was against, and long story short they fought and now it's going to be a movie!

Oh, and since no Cap thread is complete without it:

On mobile, can't link just yet. Will edit in a few when I get home, but IGN is reporting that Martin Freeman has been cast in Civil War. Looks like you really can't separate him and Cumberbatch.

The internet has taken the Martin Freeman news as brilliantly as you might expect: 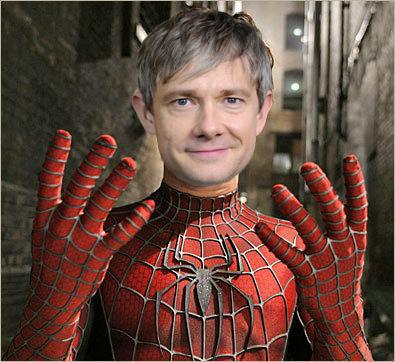 The internet is so fast these days.

...When I first read that, I thought you wrote 'Morgan Freeman'.

Came looking to see if someone made a Fargo/Thor GIF, was not disappointed.

Alright, kiddos. I know it's still a year away, but it's time to pick sides. Are you #TeamCap or #TeamIronMan? Tweet your allegiance to... this thread. And don't actually Tweet it because that won't work. And also... don't worry about #TeamIronMan; I think we all know how it's going to go.

Gawd, I actually feel bad for Tony. Cap's going to hit him so hard that his dead Dad will feel it. Cap's going to knock him right out of the suit and then give him a speech about how he's 'not mad, just disappointed' just to make it hurt that much worse. Cap's going to punch Tony's name right off the lease to Avengers Tower.

EDIT - Concept art of the suit that Cap's going to turn into so much scrap metal:

Seriously though, I am excite for this movie. I honestly think there are too many people in it and it should just be an Avengers film, but I know that it centers on Cap, and hopefully that means all these other people won't cut into his screentime. I'm stoked to see Cap kick everybody's butt (and show up the ones on his team, though, you know, he's too nice a guy to rub that in their faces).

EDIT: You know what, Cap just looks like too much of a boss in that art of him about to smash Iron Man's metal face. I gotta make that my avatar now.

It's still a Cap movie because Cap is the protagonist, plain and simple. Of course anti-registration is the good side. The registration act, or whatever they call the government-agent-to-control-supers, lines right up with SHIELD trying to control terrorism--let's face it: Insight may have been a Hydra baby, but Cap was opposed to the idea when Fury pitched him the SHIELD version--and Tony creating Ultron. They've built up to this brilliantly with the themes in Cap 2 and AoU (which I have yet to see, still ;_; ).

Tony is scared, doesn't trust people, and wants to retire. He's selfish, really, and all of that is exactly why he builds Ultron.

Cap is the brave 'America-Freedom dude who will keep fighting as long as people need protecting. That's why he disagrees with Insight.


Gah, the multi-movie structure and character development going into this

Also, I don't know how legit it was but I saw one place that seemed to think Banner would show up, too. And Spidey has been confirmed, I thought? Anyways, we should start rampant speculation on who'll be on which side...

I'm just curious to see what the exact bruh-hah-hah that casues everybody to start punching each other will be, seeing as how the original story involved forcing super-powered folks to register their identities with the government, but the MCU doesn't really have a whole bunch of heroes with secret identities. If I had to guess, though

Spoiler
I'd seriously expect Mind Control to be a component in some way. It's been a recurring theme for a while now, and hey, Scarlet Witch is definitely in this movie, so maybe she's involved with it as well? Or failing that, I could easily see something where Tony's taken some of Ultron's ramblings about humans to heart and decides that super-powered folks can't be trusted after some c-lister heroes cause a massive disaster akin to what happened in the comics? It'd be a perfect continuation on from all the crap he was pulling in AoU. There was a line in there about how he never learns, which I know was a setup for him trying to download JARVIS into the robot body, but it's also perfect foreshadowing for him trying to 'fix' the problem of superheroes causing collateral damage--hey, wait, one of the themes at the end of AoU was how they were fighting to avoid collateral damage, oh my god I just now noticed how perfectly that sets up Civil War getting kicked off by a town blowing up or something like in the comics.

Update: concept art of the suit that will swaddle The Mighty Shoulders of America as the glorious fighting happens:

This gon' be good, you guys. It looks pretty much identical to the AoU suit, but with a few stylistic touches from the Winter Soldier stealth suit. The red highlights on the chest are gone, as are the white biceps, and the boots are different. I love it!

Next in our continuing series on how badly Cap is going to beat Iron Man: Cap's durability.

Direct grenade blast knocking him into a bus that subsequently crashes? Slightly dazed for a few seconds. Forty-storey fall, landing directly on the ribs? Momentary grimace of pain, then immediately destroys a jet in hand to hand combat. Drop like two-hundred feet? Bro, he did that one on purpose, without even hesitating. He jumped onto that Helicarrier with less trepidation than I would have about walking down a staircase two steps at a time.

Also, I don't have a gif of this bit, but in that final fight with Winter Soldier I'm pretty sure he gets shot three times, stabbed twice, takes innumerable hits to the face from a robot arm and still wins comfortably. This is without even mentioning all the ridiculous stunts he pulls in Age of Ultron. I know it seems like the man in the metal super suit should have an advantage over a dude in a blue onesie, but... Captain America, you guys.

Spoiler
OH MY GOOOOOD I can't wait for these fight scenes! Was I clear enough about that? HHHNNNNNNNGHH!

EDIT - I agree that the movie seems overstuffed with characters at the moment, but I'm into it. I mean, I'd like to see another awesome Cap solo movie as much as the next guy, with Cap and Falcon bro-ing out while they track down Bucky, but this movie actually sounds even better to me: a mini-Avengers movie that focuses on the best Avenger. It's basically the movie I would make if Kevin Feige called and put the next Avengers movie in my hands. I mean, sure, I'll put all those other dudes in the background for most of the scenes, but the vast majority of the movie is going to be Cap throwing down with bad guys in the most awesome ways possible.

As for exactly how the Civil War's going to work, that's a tough one. At the moment in the MCU, there aren't really that many superheroes who actually have secret identities. Everyone knows who Iron Man is, and after Black Widow dumped SHIELD's files onto the internet, pretty much everyone else has gotta be public knowledge. The best theory I've seen, which I will shamelessly steal here, is that we're going to see a big influx of Inhumans in the MCU after some upcoming events on Agents of SHIELD. Season 2 is ending next week, and the finale is looking like all-out war with the Inhumans, and Season 3 will presumably lead right in to Cap 3. It's always hard to guess exactly how much of an effect Agents of SHIELD will actually have on the movies, though, since I imagine only about 1% of the people who see Marvel movies actually watch the show.

Anyway, I'm Team Iron Man for the sole reason of him being in power armor. I love me some power armor, mechs and all around military hardware. That and Tony's pretty funny, plus he and I are kinda alike in terms of attitude and on the rare occassion, narcisism.

After his debut in Marvel’s “Ant-Man” on July 17, 2015, Paul Rudd (“Ant-Man,” ”Anchorman 2: The Legend Continues”) will make his first appearance alongside the Avengers as Scott Lang/Ant-Man in “Captain America: Civil War.”

“Captain America: Civil War” picks up where “Avengers: Age of Ultron” left off, as Steve Rogers leads the new team of Avengers in their continued efforts to safeguard humanity. After another international incident involving the Avengers results in collateral damage, political pressure mounts to install a system of accountability and a governing body to determine when to enlist the services of the team. The new status quo fractures the Avengers while they try to protect the world from a new and nefarious villain.

With William Hurt returning and Paul Rudd joining the caste for cheap gags, this movie may just upstage the Winter Soldier. I'm really hoping they plug Steve x Sharon like they did in the comics.

Honestly, I'm completely fine with the cast being stuffed with all these characters. Just gimme more Agent 13, man.

This movie looks rad. I'm Team Iron Man, but only because I love Iron Man and he's always been one of my favourites.

I have yet to see AoU, but I plan to this week so I can't comment on any plot details yet, but the lineup looks pretty sweet. Colour me excited.

So at this point I think it's pretty much everyone except Thor and Hulk. I really never expected to see William Hurt back in the MCU. I was kind of hoping we'd never see that godawful Louis Leterrier Hulk movie referenced ever again. I really can't remember anything about his performance as General Ross apart from that one unwatchably cheesy scene where he says "By God, he's doing it!" when Tim Roth has that dumb CGI/wire-fu fight with the Hulk. God that movie was awful.

Updated list of Civil War participants, then, split into what I'm guessing their allegiances will be:

It's hard to argue with the man. He's got a compelling voice.

Maybe I will.  Wanna make something of it?  Ya wanna fight?  Ya wanna throw down?  How 'bout some...