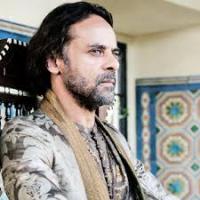 Was I the only one who didn't find last episode's fight scene ridiculous? Two swords or one sword didn't make much difference to me (although I would have liked to see Dawn), and the fighting style was fairly believable. Spinning the swords wasn't just showmanship, it's a defensive move to redirect blows from angles that he can't see. Every time he actually strikes aggressively, it's with a directed blow instead. Don't take my word for it, watch a HEMA (Historical European Martial Arts) instructor review the fight. Certainly not a historically-based fight, but well within the realm of believability.

(^Link being weird, feel free to watch the whole thing).

1. Is Zirta based on Tangier, or another well-known North African coastal city?

2. How are Southron prejudices against Beastfolk? Would it be conceivable that they trade with the Southwestern Wilds (since they're so well located for it)?

3. Are there independent Achaean kingdoms near the south? As in small former Imperial provinces that seceded?

4. Is there a unified language in Kemhet and Deshret like Arabic?

5. Is Deshret a single united empire, or a series of smaller tribes and kingdoms?