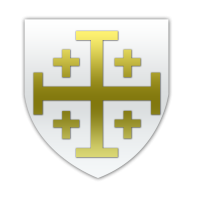 Admittedly it's more fantastical than historical, but for the Tabards and Shields section I would love to see some book-accurate Narnian heraldry. To restate: These are from the books, not the movies. The ones from the movies are much different. I would love to see some of these on some tabards! I would totally buy those!

Here's my entry, entitled "Gemini"! Hope you like it and the brief backstory I included! (PS I apologize for the low camera quality; if you click on the picture it will enlarge so you can see the details.)

My entry for the current contest, going for a Wulfgard theme. My entry is called "Gemini." Castor Aquillius (left) and his twin brother Pollux (right) are senior cohort centurions in Legio IX, the legendary Ninth Legion of the Achaean Empire. The Ninth became famous throughout the Empire, boasting the finest soldiers in the army with a practically perfect battle record. The Aquillii themselves, nicknamed the Gemini by their men, became war heroes, both eventually rising to the rank of senior cohort centurion. Not long after the twins' ascension, the Ninth became even more famous when the entire legion crossed the border of Northrim on an assignment and disappeared, falling out of contact with the Empire. All record of the legion stopped at that point and they have not been heard from for some time.

Though skilled in the use of a variety of weapons, Castor prefers to fight with a spear (or javelins) and a shield bearing the Aquillius family crest, usually only drawing his sword as a last resort or at greatest need. He turned to polearms when a fight with a bear left his face scarred. He believed that using a sword allowed the bear to get close enough to slash at him; from then on he believed that the smarter warrior should wield the spear to keep his enemy's weapon out of reach.

On the other hand, Pollux, ten minutes Castor's junior, was inspired by Tom Drake's penchant for dual wielding and decided to follow in his idol's footsteps and do the same. He loves his brother dearly, and each have saved the other's life in battle more than once. With his two kopises, Pollux fights at close range, favoring the responsibility of protecting Castor's back and sides.

The Aquillii are practically inseparable and do everything together or not at all. They choose to wear identical sets of leather armor used by the light infantry, as the fourth cohort (commanded by Castor) and the fifth cohort (commanded by Pollux) are primarily used as a vanguard or as skirmishers or hit-and-run guerilla fighters, needing to move faster and quieter. These two cohorts are often used to attack first in order to wear down the enemy forces for the main legion's attack.

Legio IX is an original part of the Wulfgard canon created by me (with permission from Scorp), based on the historical Ninth Legion of the Roman Empire, believed to have vanished somewhere north of Hadrian's wall.

Created with the online art program HeroMachine, using Scorp's sketches as a reference. Some of the proportions might look weird. That's because the figure is supposed to be standing at an angle, and most of HeroMachine's standard items are made to be pointing forward, facing the "camera." HM is a bit of a tricky program, and I'm not the best at it. At some point I intend to make the armor designs from the rest of the Big Four, too, but to start off, here's Xarkon: 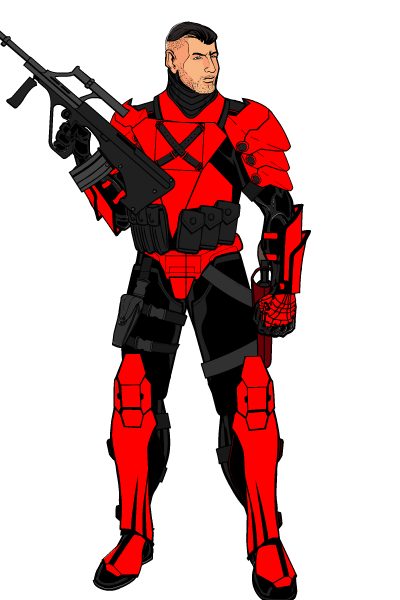 I hope you like it, Scorp, and I hope I did your brilliant design justice!

Hey everyone! So, my friend and I have a Star Trek AU that we've been building that is primarily set in the 2370's during the Dominion War, running fairly concurrently with the War of the same decade in the prime timeline, and I wanted to share a piece from it that I've been working on. A little background information on some of the characters: My character, Sovaan, is a Vulcan-Human hybrid, like Spock, but unlike Spock, Sovaan's Kolinahr ceremony, the Vulcan ritual of purging all emotion, was only partially successful, leaving Sovaan with the ability to suppress or access his emotions at will. My friend's character, working name Koval, is a Vulcan-Romulan hybrid who's Kolinahr ceremony was even less successful, leaving Koval's sanity somewhat damaged. Together, Sovaan and Koval serve as partner agents in Section 31, a top-secret, largely unsanctioned branch of Starfleet Intelligence, as well as commanders in Starfleet, with nearly impeccable service records and highly distinguished military and Security branch careers. Here is an excerpt from a WIP I'm working on. Hope you enjoy it! Let me know your thoughts!

Sovaan opened his eyes and gingerly lifted his head, wincing at an ache in the side of his forehead. He was draped across the front of the console, and there was a shatterpoint in its glass facing where his head had slammed into it. He leaned back, gasping in pain as other injuries revealed themselves. In the navigator’s seat to his right, Koval was doing the same thing, with added pain-induced curses peppering his groans.

“Emergency landing,” Sovaan replied, now aware of the symphony of grunts and groans issuing from the tactical team in the cabin behind them. “We must have passed out on impact. Self-diagnosis?”

“Bleeding nose...cracked bones in my left wrist...right ankle is - augh! - sprained...a few small cuts and scrapes...not too bad, I don’t think. What about you?”

“The most obvious is my head,” said Sovaan, “minor trauma from impact with the console. A couple of bruised ribs, too. And minor whiplash, to top it off.”

“Commander!” One of the tactical team members came forward. “Hoskins, Freeman, Fer’at, Jones, and Lenara are all dead.”

“Are you all right, Lieutenant? Who else is hurt?” asked Koval, pulling himself out his seat.

“I’m fine, sir, just a few scrapes. Hoffman’s leg is broken, Smith’s whole right arm shattered in the crash, and Broht broke three ribs. Shrassas’ wrist and forearm are pierced by shrapnel. Rogers and Sullivan are just cut and bruised, like me, sir. I think we were lucky to make it out of that crash alive, Commanders.”

“Most of us, at least,” muttered Ensign Hoffman, trying not to look at the dead bodies of his teammates.

Sovaan turned back to the console and opened a log channel.

“Unit commander’s log, supplemental: Shuttlecraft Aurelius ambushed and attacked by patrolling Jem’Hadar strike ship. Both vessels damaged in ensuing firefight. Aurelius, with failing life support, forced to retreat and make emergency landing...on Vulcan. Most of the shuttle’s sensors are down; I cannot tell for sure where on the planet we landed...but we need to find out soon...because we have only a little life support left, and temperatures inside the shuttlecraft are beginning to increase rapidly. Because our sensors are down, we have no idea where the Jem’Hadar vessel is. We have no way of knowing if we may survive...end of log.”

#470815 What should Scorp make next? LEGO Suggestions Topic

Hey Scorp (or Werewolf, because I heard that this is maybe more your thing), I would KILL for a 'fig of Data in his Nemesis-style uniform:

This style of uniform, issued Starfleet-wide after the breakout of the Dominion War in the early 2370's, is my absolute favorite. Or, if not Data, than at the very least I would love some decals of any of the Starfleet branches in this style: Looks cool! Even at such a small scale, I think it does the ship justice. You've seen those scenes where the builder uses micromodels as LEGO sets for minifigures, right? I think your Serenity could look cool in one of those. (I hope that explanation made sense.)

Fantastic work, dude! This entire thread is nothing short of brilliant! What I love about your vignettes is that, even though it's a fairly easy thing to do with LEGO, they really seem so lifelike, and they do an excellent job of drawing the viewer in and making them feel like they're actually part of the scene. Keep up the amazing work!

Dude, I love your stuff! I love how your models are jam-packed with detail in such a relatively small space. The robots and vehicles look so streamlined, and the color schemes are all on point! Excellent stuff all around! Looking forward to seeing more!

I'm Maximus Corellio, but you can call me MC, or Max, or Cor, or even "Hey, you!" if you like. I'm a singing, acting, sci-fi/fantasy loving, reading, writing, Lego-building Autistic currently living in Stone Mountain, Georgia! I've loved Scorp's incredible work for a few years now, but I'm just now getting around to joining the forums. I'm looking forward to seeing/reading the crazy-good stuff you, my fellow Earthlings, come up with and are willing to share with us. Pleased t'meetcha!