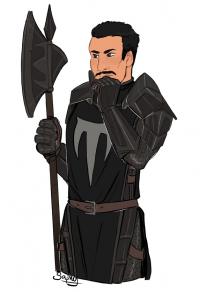 Let me be brief. I am a Male Human who enjoys Legos, reading history and good fiction, and playing pretend the grown-up way through stories and costumes.

I am a servant of the Living God, a Civil Air Patrol Senior Member, a trained public speaker, a proud Whovian, a Mandalorian in training, a fervent Browncoat, a bannerman of House Stark, a gun nut and blade enthusiast, an Airsoft Close-Quarters fighter, an amateur cook, a beloved son, and a protective older brother.

Responsibilities in the offline world often drag me away from this beloved forum, but when there is a good comic to be read, some punctuation to fix, or an author that needs some big words of vague encouragement...I shall be there.

Outstanding!  I really like the metallic shine of the paint you're using.

Any plans to add something big, like a Dreadnought or Rhino to your chapter?  No pressure, I'd just love to see something like that in your custom color scheme.

Oooh, knife-throwing action!  Excellent way to spice up the usual posing, and I love the color scheme of this character, too!  Nice variant of stealthy colors.

That looks amazing!  It's so cool to finally see one of your gorgeous tanks in a real, physical build.  Well done!

I'm wondering what the significance of her face mask is, and if the white robes and staff imply she shares some kind of wizard order with Eric Asephoka, the previous OC?

I'm loving this so far, especially now that armies and ancient orders are coming into play!

I'm glad someone else thought of that game, Neyo!  The Knights of Dol Amroth were definitely my favorite, and hero units like them are a great analogy for Nightstalker's special criteria.  Following his advice for your army building should turn out excellently as a highlight for your well-built tanks.  Scorp's World War section should be a good source, methinks.

As for the orc shamans, I greatly enjoyed what lore you've revealed so far, Nightstalker, and I thought the totems were definitely a standout addition to your epic battle scene for Brickfair.  I'm guessing the different colors on the pieces imply usage of a different element for the shaman wearing them?

I'd argue it's less crazy, and more crazy cool!  I've already placed a couple of commissions, and look forward to the results being shared here.

So masterfully crafted!  The action, the effects, the overall battle....you've well and truly outdone yourself this year, Nightstalker, and we all know that's a hard task, indeed!

You definitely made the right call to include Tom and Severina, she especially blend in well with the Ankoran color scheme.  Your new Orc Shamans were a particularly notable addition on their side of the field, those back totems really caught my eye.  As for the rest, there's too much I liked to list!  The horror of the warg den, the effects of and the natural response to the artillery, the glorious battle lines....again, too much.  Well done, my friend!  A thousand times, well done.

The ruined temple is what I'm currently most excited about, love the detail you're putting into it!  Those irregularities in the wall really sell the impression, "hey, these walls have seen better days."

So glad you're continuing this tradition for your local con, your passion and commitment to the craft are an inspiration to us all.

You're correct, that is one cool sword!  And I'm glad you added that it's durable, nerdy toys like swords are meant to be played with, after all.

Thank you for the link, I've been looking for a good place for replica swords that are more than just wallhangers.  I'll see about posting pictures of my own nerdy things soon.

I can understand the delay, that's certainly a lot of pieces to work with.  They look spectacular, though!  Or, as your inspiration would probably say, "Dose look proper Orky, so they does!  WAAAAAAAGGHHH!!!"

Your use of the various helmets and masks really accentuated the look, these orcs definitely look ready for war.  I saw a lot more shields in this group, so with all the metal work, I take it this group is particularly disciplined, with plenty of resources and manufacturing skill?

Most impressive!  I really like the colors and your use of the custom pieces to give his armor such cool effects.  The sword is my particular favorite, the metal looks weathered by countless battles, but the purple makes sure it still pops up to the eye.

The white part of the helmet looks oddly textured, not sure if it's the camera focus or if the paint wasn't cooperating with you when it dried. The latter can get aggravating when it happens to me, but the helmet overall still looks awesome!

I take it the white collar is supposed to be some sort of fur over his armor?  It really adds a lot to the look, I daresay.  Overall, well done, as always!

Indeed, I was a bit surprised to get an email that their liquidation sale was ending, and that they had something to announce later. The Legacy section was even more bewildering, though, especially since the prices are higher than before, as you said.  I guess they're trying to limp back into stability?

Another ragtag army, but a good ragtag army. I forget how varied armies are at times. I've always liked the Storm Trooper approach of everyone being the same.

The scalemail looks really good on the Frost Ravens, and you did great on the paint with Princess Adrianya!

Marcus looks dope as all get.

I also enjoy the throwback to Skorpiontowne!

Between you and Nightstalker, I feel a bigger need to commission Scorp for Lego or art.

I'll be buying parts for the new Wulfgard Imperial Legionaries eventually, those are much more uniform.  But outside of the more regimented armies like that, yes, it's quite fun to work with more varied armies.

Doesn't it?  Scorp and Mav are rightly proud of how that design turned out.

Thank you!  Your feedback brings joy to my heart.

I highly recommend it!  I'm thinking of getting something in color soon.  Speaking of which...

Awesome stuff, Cappy! All of it looks great - the armies, Adrianya - and your fully armored sigfig looks downright badass.

BTW, that berserker's chest decal was from a weird commission I got, and then included in the Patreon packages, but it works great for that purpose!

Aah, I was wondering about that!  I was frantically digging through my Patreon envelopes to find something like that, so I'm glad you included it.

Awesome group of Nords and Frost Raven! Your sigfig is also really cool!

Thanks, Nightstalker!  Back when I started RP'ing Marcus, I hadn't nailed down much about his actual looks; but when Scorp and Mav's kickstarter came up, I gave Scorp some vague instructions, and he came up with the awesome sketch here.  Then, I just ran with whatever Lego accessories would best go with the basic Inquisitor decal, and this was the result!  It took lot of custom painting since Brickforge was having stock issues even back then, but I'm quite happy with the results.

Nice Update! The Marcus figs are my favorite that you've done so far!

I really need to take some pictures of some stuff that I've had sitting around for a while...

Thank you!  As mentioned above, the WG one was a labor of love, and the SYWBAA one was also quite fun to design.

You should, I've found it quite therapeutic.

For the next update, I'll probably just take pictures of more minifigs I've already assembled, but have kept lying in my drawer.  Or drawers.  And a box or two.  Wulfgard may be my current favorite universe/Stebbins franchise, but it's not the only set of decals I've purchased, as you'll soon see.