Yes, majhost.com is a good one favored by SSLF users. Very simple and not too many ad banners.

Also I increased the upload size limit for Freebies, so you can try that again. But if it's still too big, majhost.com is probably your best bet.

Thanks Halfbaked139, the only bad thing is that whenever I try to link my post with the information and backstory, it says that the image http://www.majhost.c...ry.cgi?f=287327

Never mind, I got it work.

Actually, thank Scorp. As I recall, he's the one who recommended Majhost to me. By my count, it's a year to the day since I set up my account.

Also, I swear I'm working on my stuff. I just can't get it quite the way I want it, because I'm irritable, picky, tired, and...I forget the last one.

Oh right. Forgetful. That's the one.

I think SSLF'ers make up 90% of the Majhost user base.

I'll post about it here, and in a news announcement, and PM the winners. If you have email notifications set up, you should get an email when I PM you.

Quick reminder: Just one week left in the contest! Still time to put together a last-minute entry if you've been thinking about it!

Quick question, I noticed that my entry hasn't been added to the list of entries.  Do I need to fill out something, or has it just not been updated?

And as a final reminder to everyone, the contest closes tomorrow at midnight! That means there are still about 36 hours left - plenty of time to draw a picture and write a thing. C'mon, I was hoping for a few last-minute entries.

C'mon, I was hoping for a few last-minute entries.

I swear I haven't forgotten. The crap has really hit the fan here lately. I'll try to wrap up tonight.

Most anywhere along the Jagged Edge would work. The Jagged Edge mountains run the length of the world, from north to south, separating East from West, so all regions border them. If you'd like a particular location, there's one I explored in an old story called Darkcliff Gorge, which is full of wyvern-caves and tribes of orcs. It's located in Northrim in the foothills of the Jagged Edge.

Sure, that would be fine!

Oh right, I forgot to specify the number of monsters you can enter. Let's say, two entries per person. Only one of your entries can win a prize and a medal, of course, but entering more than once can improve your chances. 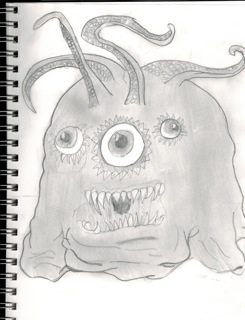 Bio/Backstory
Ages ago, in the time when demons walked the Earth, making humanity their slaves, a little imp served under a bushaspor lord who ruled over a wide amount of land. The lord used the imp as a tool of humor in a sick way to impress other demons.

Then, one night, the lord held a feast, bringing all sorts of powerful fiends, one of which was a greater demon. After much eating and drinking, the swarm of powerful demons fell into a deep slumber. Seeing his chance, the little imp began his descent upon his enemies. He devoured their life essence, transforming into a higher class of demon.

When he rose from his great meal, the fiend that previously was an imp found himself a greater Bushaspor, the physical embodiment of gluttony. He named himself Ovrigrrsnak, meaning the Great Devourer.

He has remained dormant in the 3rd Circle of Hell. Up until recently, he slept in turmoil, but for an accidental summoning by the Black Sun cult. The cultists were quickly bent to the mercy of Ovrigrrsnak.
He now awaits the proper moment to return his world to chaos.

Description & Abilities
Ovrigrrsnak has many different abilities, including a giant grotesque eye with a paralytic gaze that can stop even the most strong-willed warrior. The slime that oozes off of his bulbous body has an acidic touch. The touch of his tentacles is also deadly acidic, able to eat through adamantine. He is capable of swallowing an average-sized humanoid in a single gulp, and has foot-long pointed teeth.

Do you have a picture to go with your entry, DragonJedi?

I couldn't get the site to let me upload an attachment. I tried pasting it into the text editor window and the image showed up on preview...I guess the image got lost when it posted, though. The Lich Queen of Kemhet.

Just wanted to get the ink up. Will color and add write up shortly. Now sleep. *collapses.*

That's cool - I see the image in the gallery system, so I went ahead and edited it into your post. You can still edit it again if you want to fiddle with it before closing time.

Once upon a time an Achaean knight visited a town to see if the local lord needed any help. 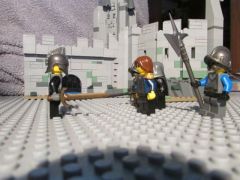 This lord had offended Arachne, and the vengeful deity of spiders had sent a giant spider to eat his townsfolk. 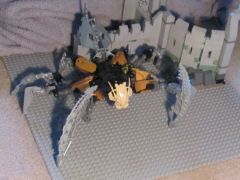 This spider destroyed many villages, and the guards were helpless to stop it (or else who would need adventurers?)
The king told the adventurer of a relic that would help the hero slay this beast. The kings advisor was about to warn the knight about another relic in the ruins, a  cursed sword but the reckless adventurer did not heed the warning

son he came across the two relics 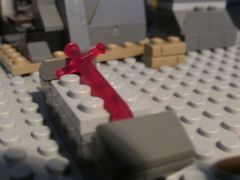 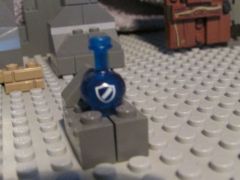 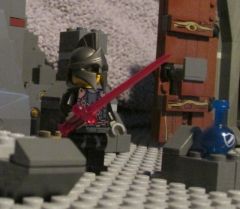 When he picked up the sword... 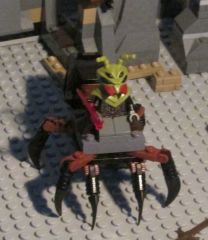 He turned into a hideous monster. He read strange runes that appeared on the blade and grimly accepted his new identity - Lord Araknos

Long ago, a powerful group of Dark Elves had abandoned their brethren and chose to worship being different from the demons who gave them power. They began to worship beings such as Sturmkrag and other powerful dragons. They viewed humans as animals, seeing no desire to kill or even interact with them. Though they had no real care for anything other than dragons, they were still very concerned when it came to their appearance. They were prideful people, and always sought out different forms of illusion based magic to make them beautiful. They viewed all as unworthy of breeding with them, yet they sought the attraction of both genders. They had removed any sort of anatomy that would differentiate them, leaving only appearance to determine if one was male or female. After physical perfection was not a problem, they began to seek any form of knowledge existing. Most of them are untrusting of the other, constantly trying to be better then their brethren.

Their skin is more pale than that of a normal Dark Elf. They also have eye colors ranging from red and purple to even yellow and green. Their hair I usually dark red, black, or even pale white. Their ear tend to be hidden by their hair, as they do not wish to be viewed as elves, and are ashamed of their other elven brethren.

Their illusion based magic has granted them abilities such as teleportation, invisibility, and even mind control to some extent. They fear the oceans, as it mainly represents the unknown to their culture. Because of this, they cannot swim and dislike creatures such as Sea Serpents. They are completely sterile, and show no desire at all to have offspring, as they would just be contenders in the never ending battle for supremacy among the Void Walkers.

Though they do not actually view the Dragons as deities, they view them as sources of great power. Under their protection, the Void Walkers would be stronger than ever. They are one of the few races that are not viewed as animals, and are sometimes seen as wiser than the Void Walkers. Beside this, they show almost no concern for worshipping anything other than themselves.

(Note: I am unsure if the name has already been used, but I would be glad to change it if that is the case.)